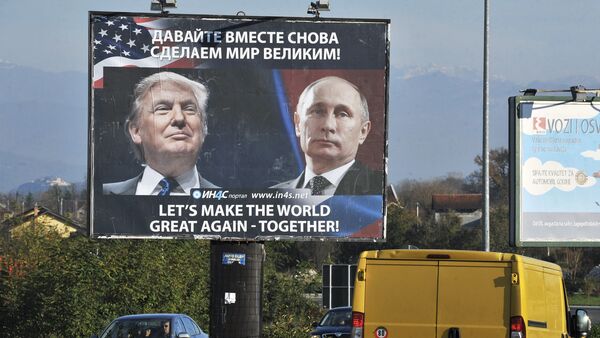 © AFP 2023 / Savo PRELEVIC
Subscribe
International
India
Africa
The first ever Putin-Trump meeting could become the key to the future of Russian-American relations, Russian political analyst Anatoly Petrenko told Radio Sputnik. Although the meeting is unlikely to solve all the burning issues it could contribute to the formation of personal trust between the presidents, the analyst believes.

Russian presidential aide Yury Ushakov stated that Moscow will outline its program of stay in Hamburg to the United States at the G20 summit.

"We are coordinating the time. We will outline to the Americans the program of our stay in Hamburg, tell them which meetings we agreed on and try to enter an important meeting with Trump on the schedule," Ushakov told reporters when asked about preparations for the upcoming meeting between the Russian and US leaders in Hamburg.

World
Putin-Trump Face Tough Agenda at Talks Yet Likely to Strike Good Relationship
For his part, National Security Advisor H.R. McMaster announced Thursday that Trump and Putin would meet on the sidelines of the G20 summit in Hamburg next Friday and Saturday.

Moscow expects that the meeting of the two leaders will bring clarity on the future of Russia-US relations, Foreign Minister Sergei Lavrov said Friday at the 2017 Primakov Readings, an international forum named after former foreign minister and prominent Russian diplomat Evgeny Primakov

"We [believe] that our president's meeting in Hamburg would clarify the prospects of the Russia-US ties," Lavrov said.

"The relationship between Russia and the United States on which the solution of many international issues depends — from ensuring strategic stability to solving regional crisis — is of utmost importance in today's world. We see that most countries are concerned about the present abnormal state of [Russo-American] relations which have become hostage to the internal political struggle in the United States," the Russian foreign minister stressed.

"The meeting between Putin and Trump can become the key to the further development of relations between our countries," Petrenko said, adding, however, that it would be naïve to think that the first Putin-Trump meeting will solve all the current problems in US-Russian relations.

Russian Foreign Minister Hopes Putin-Trump Meeting in Hamburg 'Clarifies' Ties
"It would be naïve to hope that the first meeting will bring complete clarity on the full range of issues concerning the relationship between the US and Russia. But the basic issues need to be addressed," he underscored.

"I think that this meeting, first of all, can contribute to the formation of personal trust between the presidents. This is very important for bilateral relations. Both presidents are pragmatists. But the fact is that our interests coincide in many respects on a number of issues," Petrenko pointed out.

The first ever Putin-Trump meeting has caught the headlines in recent weeks, although the Kremlin and the White House only confirmed it would take place on Thursday and Friday next week.