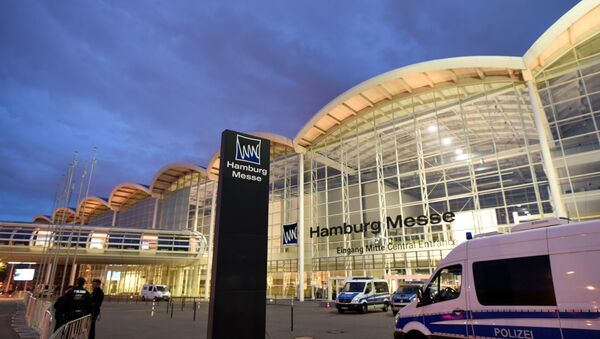 © REUTERS / Fabian Bimmer
Subscribe
International
India
Africa
The main topics that will be discussed during Russian President Vladimir Putin and US President Donald Trump meeting on the sidelines of the G20 summit next week, according to experts.

MOSCOW (Sputnik) — Russian President Vladimir Putin and US President Donald Trump are expected discuss a number of pressing bilateral and international issues at their upcoming meeting on the sidelines of the G20 summit next week, but are still likely to forge a good working relationship and establish a positive environment during their first official meeting, experts told Sputnik on Friday.

The first ever Putin-Trump meeting has made the headlines over recent weeks, with its prospects uncertain despite the two leaders set to be be present at the same venue alongside over a dozen other world leaders. The sides repeatedly failed to confirm the meeting, with Trump reportedly told by his advisers to avoid a bilateral meeting and instead have a short talk on the sidelines of the G20 or hold a delegation-level meeting likely without the leaders' involvement. Both the Kremlin and the White House finally confirmed the meeting on Thursday and Friday.

Putin-Trump Meeting Format to Be Discussed - Russian Presidential Aide Ushakov
While the place of the meeting between Trump and Putin was confirmed on Thursday by US National Security Advisor H.R. McMaster, the time, format and the agenda of the talks are still being worked out though diplomatic channels, with US experts suggesting the Russian and US presidents would discuss Syria and Ukraine, among other issues.

"They are likely to to be able to forge a good working relationship, both of them are leaders that rely on a personal connection. I think the atmosphere will be positive, but the agenda is a difficult agenda — on the questions of the INF [Intermediate-Range Nuclear Forces] treaty, on Ukraine, on Syria, on Russian interference in Western elections — it is not going to be easy to find common ground," Charles Kupchan, a senior fellow at the Council on Foreign Relations think tank, suggested.

Trump's pledge to improve ties with Russia when he took office this year may prove to be difficult to implement, as the two countries have a lot of tensions on several topics, including allegations of Russia's interference in US elections, which Moscow has repeatedly denied.

"Trump as a candidate has made it very clear that he wanted a better relationship with Russia. That is much harder to do at a time in which there is a political and legal investigation into Russia's interference in the US elections and what the Trump campaign's involvement may have been. Against that political backdrop, it makes it more difficult for them to take major steps forward, but let's hope for the best," Kupchan, who is also the former director for European Affairs at the US National Security Council, said.

Henry Kissinger Urges US, Russia to Settle Tensions by Negotiation
Another US expert, Robert Manning from the Atlantic Council, urged to keep expectations of Putin-Trump talks low, reminding that the only necessary outcome from the meeting in Hamburg should be the establishment of working relations between the two leaders.

"I wouldn't have many expectations, but the most important thing is that they establish the working relationship, that's the most you can hope for in the first meeting. But they will meet again, I think. Trump will be going to a lot of the meetings in Asia, Putin will be at the East Asia Summit, APEC [Asia-Pacific Economic Cooperation] and so on. So there will be other opportunities to continue this dialogue," Manning, a senior fellow at the Brent Scowcroft Center on International Security and its Strategic Foresight Initiative at the Atlantic Council, told Sputnik.

Manning argued that the recent trip of former US State Secretary Henry Kissinger to Moscow to meet with the Russian president and attend the Primakov Readings summit would play a good role in normalizing US-Russia relations.

"Henry Kissinger did meet with Putin and I think he's a good back channel of information to Trump, so I think this will be helpful. Mediator is too strong a word, but I think he will play a role in helping arrange a dialogue," the US academic explained.

SYRIA MOST URGENT TOPIC ON AGENDA

Russia and the United States have plenty of topics where they seem to be at odds, but the sides should focus on moving forward on Syrian settlement, experts stressed.

"Syria is the most urgent [topic on the agenda], because we have two of the biggest militaries in the world bumping into each other… there needs to be some discussion of the way forward, deconflict and to move towards some solution of the Syrian problem," Manning argued.

Russian Foreign Minister Hopes Putin-Trump Meeting in Hamburg 'Clarifies' Ties
Meanwhile, Charles Kupchan expressed hope that Trump and Putin would touch upon the topic of resumption of the US-Russian treaty on flight safety over Syria, as well as a general long-term strategy to settle the Syrian conflict.

"My understanding is that at the working level Russian and American military are still talking to each other simply because they have to, the battle space in Syria is tight, there are a lot of aircraft flying around, so it's in the interest of both parties to keep the channels of communication open, but I assume when Putin and Trump meet they will be talking about not just air deconfliction but the long-term vision for political settlement in Syria," Kupchan, who is the former director for European affairs at the US National Security Council, told Sputnik.

Another issue, which is expected to come up at the Trump-Putin meeting is the alleged violation of the Intermediate-Range Nuclear Forces Treaty (INF Treaty) by Moscow and Washington's threats to unilaterally withdraw from the agreement.

"There's a lot of mindless anti-Russian sentiment in the US and I think it would be a mistake [for Washington to withdraw]. We need a negotiation to stabilize the INF agreement, not get rid of it. That [treaty] got rid of the whole category of weapons and it doesn't make sense to bring them back now. There is concern that Russia is developing weapons that are in that category, so we need to discuss that and to see if there's a way to walk that back and get a mutual commitment to respect the treaty," Manning urged.

Putin, Trump Will Meet at G-20 Summit
Meanwhile, the Council on Foreign Relations senior fellow Kupchan argued that the future of the INF agreement depended on Russia showing its commitment to the treaty to the United States.

"It depends on whether Russia is prepared to step back from developing a missile that violates the agreement. The unilateral action has been taken by the Russian side," he said.

Russian Foreign Minister Sergey Lavrov has repeatedly said that Moscow was in full compliance with the INF Treaty. According to Lavrov, Moscow had its own concerns over Washington's compliance with the treaty and had repeatedly called on the United States to discuss in detail the most controversial points related to the agreement's implementation.