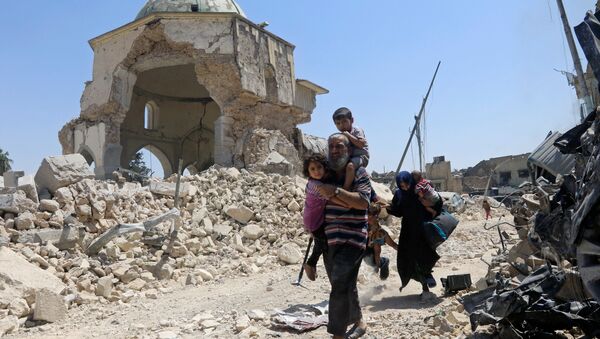 On Thursday, the Iraqi ministry of defense announced that Daesh had been driven out of all districts of the city of Mosul, ending an anti-terror operation that began last October.

However, a US spokesman for Operation Inherent Resolve said that fighting continues in some areas of the Old City.

Iraqi government troops have liberated the area around the ruined Great Mosque of al-Nuri, which was constructed in 1172. The mosque, where Daesh leader Abu Bakr al-Baghdadi announced the establishment of an Islamic caliphate in June 2014, was destroyed by Daesh in an explosion on June 21.

"I see it closer to days than a week or weeks," Dillon stated.

Belkis Wille, Senior Iraq & Qatar Researcher with the Human Rights Watch, told Radio Sputnik that while humanitarian organizations are putting a lot of effort into helping the people of Mosul, it will be a long time before many can return to their homes.

"The humanitarian community has really launched a robust response to deal with 700,000 people that were displaced by the fighting. They've opened many camps and they're trying to meet the needs of these people. However, there has been so much destruction, particularly in West Mosul, including entire neighborhoods, that it's going to be a very long time before many of the residents can go home. So, the humanitarian challenges are going to continue for the coming months."

Areas of the city under Daesh control are without access to drinking water, food and medicine. Many residents have fled those areas of the city, but even in areas under government control there are shortages of food and water, Wille said.

"Even the neighborhoods that are retaken have very limited electricity, water and food supplies, and also many hospitals have not reopened yet."

"The East of Mosul, which was fully retaken by January, has seen most residents return – that was the part of the city that saw very little destruction during the course of the fighting."

"In West Mosul, we are already seeing some tens of thousands of families that are returning to certain neighborhoods. But obviously, they are not going back to those neighborhoods where the heaviest fighting is ongoing, or where the destruction has been the most significant," Wille said.

Unable or Unwilling? Why the US and Its Coalition are Bogged Down in Mosul
The United Nations Development Program is working with the Iraqi government to rebuild the area, and has launched over 200 projects to accelerate the immediate stabilization of Mosul and greater Ninewa Governorate.

The projects will repair damaged water, sewage and electrical systems, rehabilitate education and health facilities, and boost the local economy by employing youth on work brigades to remove rubble, open transport routes and revitalize the city.

"There is quite a strong commitment on the side of the international community to continue with these efforts once the battle for Mosul is over."

Bush Sr. Was Right to Avoid Toppling Iraq's Hussein - Putin
Apart from efforts to reconstruct the city, the authorities now face the task of correctly identifying Daesh terrorists and bringing them to justice.

"Anyone who lives under ISIS (Daesh) for a significant period of time, is treated by the Iraqi forces as a potential terror suspect. So men and boys get checked against a database of names of men and boys that are wanted for ISIS affiliation. Frankly, you can end up on that list if you had a family or a land dispute with someone else and they will add you to that list."

"We're seeing thousands of men and boys being picked up because their names appear on this list and then they're held in inhumane conditions. We've seen rampant torture of these men and boys and in some cases execution."

The US-led coalition and the Iraqi government should be just as concerned with the "political battle" in Mosul as they are with the military battle, Wille said.

"The political battle is really to have the Iraqi government stop allowing forces on the ground to carry out rampant abuse with impunity, mostly against Sunni Arab men. As long as the coalition is not paying as much attention to that, we do see a pretty bleak future for Iraq. What we hope is, while they're still interested in this battle, that they really dedicate themselves to pushing Baghdad to stop allowing this abuse."