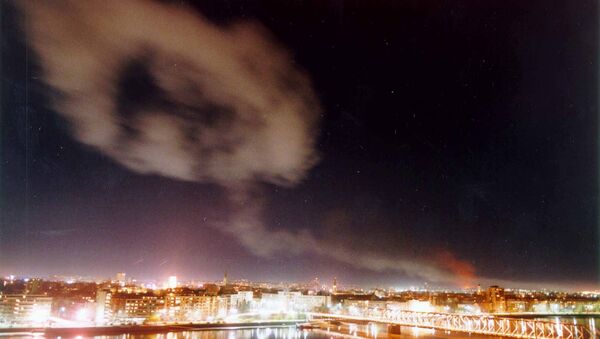 Commenting on the recent survey carried out by a Serbian think tank amongst the students of the University of Belgrade, which revealed that the overwhelming majority oppose the country's accession to NATO and nearly 40% would not vote for its membership in the EU, the organizers of the survey explained to Sputnik the reasons behind the answers.

'Irreconcilable and Humiliating': Why Serbian Students Oppose Joining NATO, EU
Earlier in June, the Center for International Public Policy, a Serbian think-tank, revealed the results of a recent survey it conducted amongst students from the University of Belgrade.

The Center surveyed 1,323 students from 38 faculties on Serbia's accession to NATO and the EU, and on the country's foreign policy.

An overwhelming majority, 88 percent, were against the country's accession to NATO. Nearly 40 percent (39.7) said they would not vote for Serbia's membership in the EU, while 28.9 percent would vote in favor of EU membership. Others either did not have  any stance on the issue (22.4 percent) or said that they would not turn out for such a vote (a little over eight percent).

Meanwhile, 50 percent believe the country won't be accepted into the bloc, while 24 percent think this will happen and 26 percent have no opinion on it.

One of the organizers of the survey, a student of the faculty of political studies, Milos Pavkovic commented to Sputnik Serbia on the results, saying that the responses about the EU membership were quite unexpected, while those about NATO accession were "more or less logical."

"The memories of the 1999 NATO intervention are still quite fresh. Some students might not remember it, but there is plenty of information about those events. I was a five —year-old boy at that time and NATO bombings were one of my first childhood memories. It was an enormous stress which is embedded deeply into my memory," he told Sputnik.

Serbia to Sue NATO Over Damage Caused by 1999 Bombing of Yugoslavia
Besides, Milos Pavkovic said, students base their positions on the available information about NATO interventions into other countries, which is negatively reported about in Serbia as well as in many other countries.

Another organizer of the survey, Djurdjija Mastalo, noted to Sputnik that the age is not the major factor in defining the stance towards NATO. It is being largely shaped by the family opinion. While such arguments as "by joining NATO, Serbia would feel more secure" don't make any difference.

"Serbian people are very negative towards NATO, and students are no exception. Such a high percentage of those who oppose joining the alliance can be explained by the high number of young people who support Serbia's military neutrality. The spirit of pacifism is a very positive signal in the current conditions," she told Sputnik.

While commenting on the results on Serbia's membership in the EU, Milos Pavkovic suggested that the reason for such a vote is that Serbia has been trying to join the EU for 15 years already. Students, as well as the entire Serbian society, are gradually losing hope as the EU keeps putting forward new pre-conditions. The EU, he said, is very slow in recognizing that Belgrade has met these pre-conditions. Additionally, developments such as Brexit and the refugee crisis also negatively influence the position of the students.

Interestingly enough, Serbia's membership within the EU is supported by the students of the medical faculty. Many doctors and medics leave Serbia to work in other EU countries. While the major opponents of joining the EU are the students of humanitarian and social sciences.