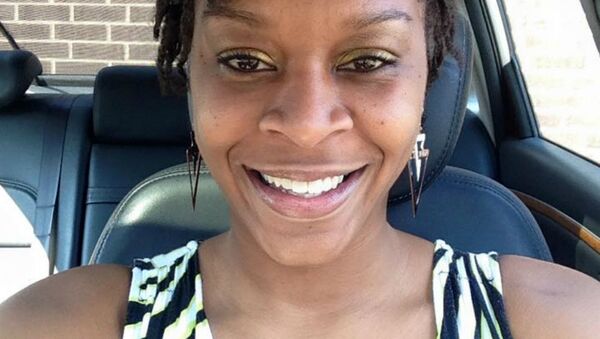 © Facebook/Sandra Bland
Subscribe
International
India
Africa
On Wednesday, prosecutors dropped a perjury charge against a former Texas state trooper who arrested Sandra Bland, a black woman who was arrested for a minor traffic offense and was later found hanged in her jail cell in July 2015.

The 28-year-old Chicago native was driving from Illinois to Texas to start a new job at Prairie View A&M University, her alma mater, when she was pulled over 50 miles northwest of Houston in Waller County by State Trooper Brian Encinia for improperly signaling a lane change.

Bland was taken into custody after allegedly getting into an altercation with Encinia. A video shot by a bystander shows Bland repeatedly asking why she’s under arrest and Encinia shouting at her. Officers later can be seen pinning her to the ground as she complains of abusive treatment.

Three days later she was found hanged to death in her cell with a trash bag around her neck, in an incident the sheriff’s department ruled “self-inflicted asphyxiation,” though friends and family denied that she was suicidal.

The dubious circumstances of Bland’s death prompted activists in the Black Lives Matter movement to decry the incident as an example of racist policing in the US, resulting in mass protests nationwide.

In January 2016, a grand jury charged Encinia with making a false statement on Bland’s arrest report, which could have earned him up to one year in jail. A part of the prosecution’s motion to dismiss was the officer surrendering his law enforcement license with a promise that he "will not pursue or engage in employment, in any capacity, with law enforcement."

A judge agreed to this motion, according to Chip Lewis, Encinia’s attorney, who wrote in a statement that "Brian and his family appreciate the thoughtful review by the prosecutors. Dismissal was the right thing to do."

"When you have evidence that an officer lies about what happened out in the field in a police report, and it is caught on tape that he is lying, you have to prosecute to ensure the community they are going to get a fair shake," said Bland family lawyer Cannon Lambert on Wednesday.

The Texas Department of Public Safety fired Encinia, issuing a final letter of termination on March 1, 2016. Describing the reasons for his termination in a preliminary statement of charges, the department faulted the former officer for his behavior, writing, "During the traffic stop of Sandra Bland on July 10, 2015, you failed to remain courteous and tactful in the performance of your duties. You engaged in argumentative discussions with Ms. Bland and you failed to exercise patience and discretion throughout the contact."

The charges also say he "prolonged the traffic stop beyond the time reasonably necessary to complete the tasks associated with the traffic infraction. Consequently, you extended Ms. Bland's detention without a reasonable justification or legitimate investigative purpose for doing so."