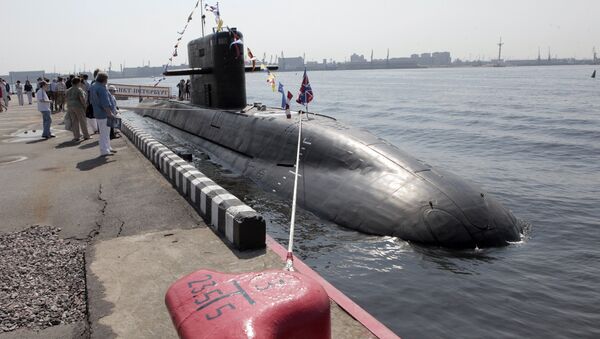 Russian Navy to Receive Biggest and Most Unique Nuclear Submarine in the World
Speaking at the 2017 International Maritime Defense Show in St. Petersburg on Wednesday, Vice Admiral Viktor Bursuk, deputy commander-in-chief of the Russian Navy, said that the Lada-class diesel-electric submarines will become the main project in Russia’s development of its non-nuclear submarine forces.

Bursuk added that a series of these submarines "will be very large" and their modernization specifically includes equipping the vessels with air-independent propulsion systems.

Alexander Buzakov, Director General of the St. Petersburg-based Admiralteiskiye Verfi shipyard which builds the Lada-class (Project 677) submarines, relayed that the fourth and fifth submarines of this project will be built within the next five years.

In his opinion, this will be a Russian response to the US military's drive to  develop its non-nuclear forces.

"If we consider underwater air independence (subs’ ability to remain submerged for long periods of time) from a geopolitical point of view, our diesel-electric missile-torpedo submarines are also one of the vectors for the development of non-nuclear weapons," Nenashed added.

According to him, "a lot of the new systems are being used on board the Lada-class Sankt Peterburg submarine, which is currently undergoing a final test by the Russian Northern Fleet."

"A lot of systems are being used, mainly those related to navigation and radar arrays as well as electronic warfare, and cyber-security," Nenashev said.

Construction of the Sankt Peterburg, the lead ship of Project 677, began in December 1997. It was introduced into the Navy for trial operations in April 2010. Two other Lada-class submarines have already been laid down.

Russia's United Shipbuilding Corporation said last year that the construction of the Kronstadt and Luki would be completed between 2018 and 2019.

111 Years of Naval Glory: Landmarks of Russian Submarine Fleet
Air-independent, closed cycle submarines, which usually use hydrogen-oxygen fuel cells, are quieter than conventional diesel-electric vessels and do not have to surface or use snorkel tubes to breathe air, thereby shielding themselves to from detection by radar and other sensors.

The surface displacement of the Lada-class submarine is about 1,800 metric tons. Its depth of the dive stands at around 350 meters. The vessel's maximum underwater speed is about 21 knots (39 kilometers per hour).

The Lada-class submarines, which carry six 533-mm torpedo launchers and can fire Kalibr cruise missiles, are designed to defend naval bases, coastal waters and sea communication lines. They can be effectively used against both surface ships and submarines.