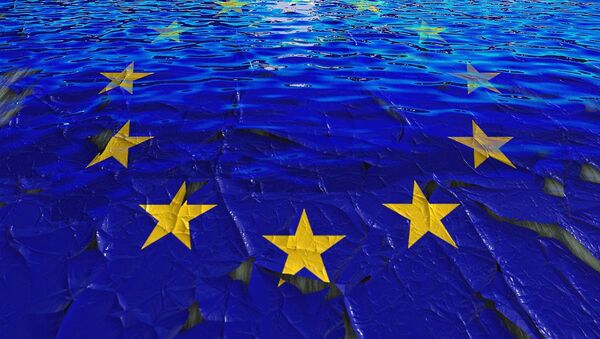 'Not a Coincidence': New Anti-Russia Sanctions Are Senate's 'Gift to Poroshenko'
On Wednesday, the Council of the European Union (EU) announced the official extension of anti-Russian sanctions, due to expire on July 31, for another six months over the alleged lack of progress in the implementation of the Minsk peace agreements on settling the ongoing situation in Ukraine.

Moscow expressed dissatisfaction with the decision, noting that the sanctions hinder Russia's development with the EU, including issues related to Brussels' ties with Russia.

"The sanctions did not reach the aims for which they were intended, they did not change Russia's foreign policy and had no influence on the situation with the Ukrainian crisis," Andrey Kelin, head of the Russian Foreign Ministry's Department of European Cooperation, told reporters.

Speaking to Sputnik, Russian political analyst Nikolai Shlyamin who is also leader of the United Youth Front public movement, said that the EU's prolongation of the anti-Russian sanctions are in sync with Washington's interests.

"The European Union continues to pursue a policy based on America’s interests, completely forgetting about the economic interests of Europe itself," Shlyamin said.

According to him, both the EU and the US are concerned about the strengthening of Russia's role on the global stage.

He recalled that "Brussels' main arguments for extending the anti-Russian sanctions are related to the situation in Crimea, which Europe cannot forget, and Syria, where the situation has completely changed and where the Syrian Army's victory is just a matter of time."

"In this regard, we witness a very active turnaround in the direction of Russia of many countries of the Middle East and the whole world which see Moscow as a reliable partner," Shlyamin added.

"Russia's strengthening in today's world irritates the EU and Washington because they realize that they are losing their own positions. In this vein, the policy of extending anti-Russian sanctions is aimed at making Moscow face economic problems and halt its course toward upholding its interests [in the world]," he concluded.

The EU introduced economic sanctions on Moscow in 2014 after Crimea's reunification with Russia.

Among the key restrictions are a ban on long-term loans to major Russian banks, energy and defense companies, and curbs on exports of equipment and technology for offshore and shale oil production to Russia.

US Seeks to Provoke 'EU-Russia Spat' With New Sanctions in Energy Sector
Special restrictions, including a ban on investment, target Crimea and Sevastopol.

The European Union, along with the United States, has repeatedly prolonged the anti-Russian sanctions, imposed after Brussels and Washington put the blame for the eastern Ukraine conflict on Moscow and refused to recognize Crimea's rejoining Russia as a result of the March 2014 referendum.

Moscow has more than once refuted the allegations and in August 2014 introduced retaliatory restrictions on food imports, which were prolonged until the end on 2017.

000000
Popular comments
Maybe it will be a good idea of Russian to remind the Europeans, Russian's victory in WW2 was real but USA's was just an imagination. Perhaps it works.