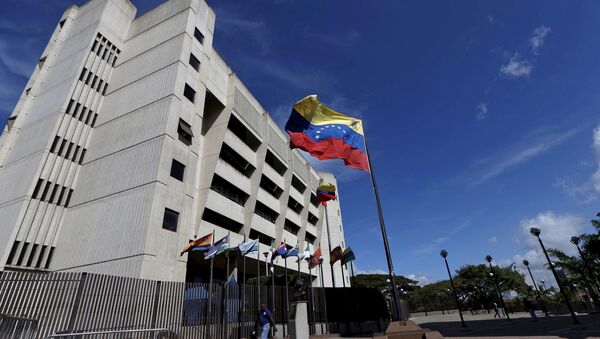 Perpetrators of Helicopter Attack in Venezuela Demand Maduro’s Resignation
MEXICO CITY (Sputnik) – Earlier in the day, Villegas said that a hijacked helicopter of the police investigative agency, known as CICPC, attacked buildings housing the country’s Supreme Court and the Interior Ministry. Local media reported that Oscar Perez, who used to serve in the CICPC, piloted the helicopter during the attack. The perpetrators demanded immediate resignation of President Nicolas Maduro and general elections. Maduro labeled the attack as an act of terrorism and pledged to catch the perpetrators.

"Neither of these attacks will not hamper the work of the national Constitutional Assembly and the July 30 election process," Villegas said in a televised address.

In October, the National Assembly voted to initiate impeachment proceedings against Maduro. In January 2017, the parliament declared that Maduro abandoned his post as result of refusing to carry out his duties. The Supreme Court of Justice, however, stated that the National Assembly does not have the constitutional powers to declare abandonment. Maduro classified the parliament’s actions as a coup attempt.

In March, the Venezuelan Supreme Court decided to restrict the power of the state’s National Assembly. The decision was immediately reversed amid backlash, but supporters of the opposition-controlled parliament, who strive for the dismissal of the court members, took to the streets on April 4, marking the start of a of protests, which have claimed at least 75 lives.