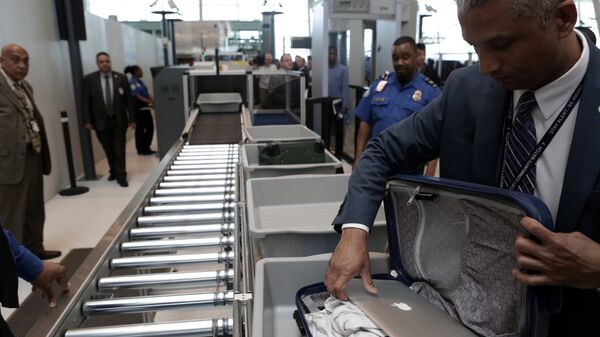 Airlines bound for the United States will be required to employ more bomb-sniffing dogs and upgrade technology.

US Homeland Security Not to Introduce Laptop Ban on Flights From Europe
WASHINGTON (Sputnik) — Airlines bound for the United States will be required to employ more bomb-sniffing dogs and upgrade technology under a new set of requirements that were unveiled by Homeland Security Secretary John Kelly on Wednesday.

"It is time we raised the baseline for international aviation security," Kelly told guests at the Center for New American Security think tank in announcing the regulations. "We cannot play international whack-a-mole with each new threat."

Airlines that fail to comply with the new set of security rules will not only be banned from using laptop computers but will no longer be allowed in checked luggage either, senior officials from the Department of Homeland Security (DHS) told reporters in a background briefing.

"We believe that every airline at every airport in the world can meet these standards in a very short period of time if they choose to do so," a senior DHS official said.

For airlines that fail to comply, "we would make changes up to and including the removal or disallowing of PEDs [Personal Electronic Devices] on the aircraft," the official stated.

Upgraded screening regulations for laptops and other electronic devices larger than a cellphone will apply to 280 airports in 105 nations, DHS announced.

"The enhanced security measures, both seen and unseen, will improve screening of passengers and electronic devices and heighten security standards for aircraft and airports," a senior DHS official told reporters.