Not About Money: Why Poland, Ukraine are Boosting Military Equipment Trade 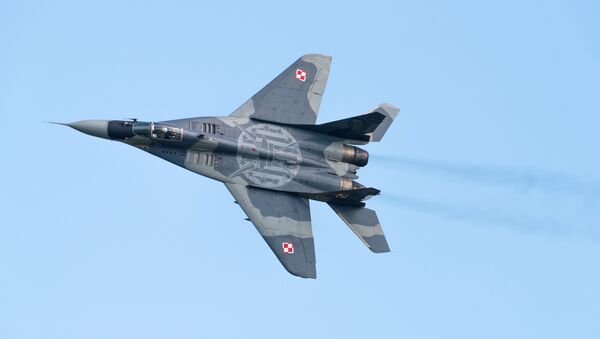 CC BY 4.0 / Julian Herzog / Polish Air Force Mikoyan-Gurevich MiG-29A Fulcrum
Subscribe
Recent reports suggest that Poland and Ukraine have signed a military cooperation agreement, according to which Ukraine will supply its radar-guided R-27R1 missiles. Kiev, in return, will get surveillance and guidance devices from Poland. Russian military expert Victor Litovkin commented to Sputnik Polska on the viability of the deal.

Ukraine and Poland: Recognizing the Bleak Side of the Post-Maidan Regime
Poland and Ukraine have signed military-technical cooperation agreement, under which Ukraine will supply its radar-guided R-27R1 missiles, the main armament on Poland 's Soviet-era MiG-29 fighters.

Kiev, in return, will get surveillance and guidance devices from Poland for its armored vehicles.

Sputnik Polska discussed the issue with Russian military analyst Victor Litovkin, who commented on the viability of the deal.

"Trading arms with countries with ongoing civil wars or other military operations is forbidden under international law. Therefore the arms sales to Ukraine are forbidden by decision of the UN Security Council. However, what Poland is selling to Kiev is not armaments but combat support systems: binoculars, Poland surveillance and guidance devices and communication tools. In other words, the devices which don't shoot and don't pose a threat to a human life, and thus don't fall under the UN ban," the military expert told Sputnik.

Litovkin, however, added that it is a known fact that Poland has unofficially supplied tanks and other weaponry to the Ukrainian army in violation of international obligations.

'Powerless Senility': Poland Unwilling to Heed Ukraine's Nationalist Threat
The fact that Ukraine is selling its air-to-air missiles to Poland is Ukraine's sole business. It might have accumulated excessive supplies of them in its depots while it didn't have any aircraft in working condition. That is why Kiev is selling its missiles, thus earning money, he said. The Motor Sich plant, which is manufacturing the engines for these missiles, has been working at half of its capacity because all of its products have mostly been supplied to Russia.

The Ukrainian leadership, the expert said, has recently banned supplies to Russia. Thus the plant has to earn some money for its survival.
While commenting on this particular deal, the expert said that it is highly unlikely that Ukraine will get any particular benefits from it. It is not a large-scale agreement. Nor it is of any significance for Poland.

The Polish political elite, he said, will continue supporting Ukraine not because of this deal or because it likes Ukraine, but because Ukraine opposes Russia, under the  principle of "the enemy of my enemy's my friend," Litovkin stated.