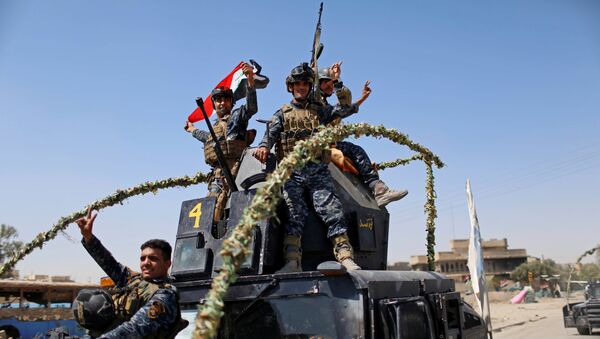 Iraqi servicemen liberated from the Daesh terrorists the neighborhoods of Sadeh and Ahmadiya in the old city of Mosul, according to the commander of the Mosul offensive.

US-Led Coalition Strikes Destroy 14 Daesh Positions in Mosul - Joint Task Force
BAGHDAD (Sputnik) — The Iraqi military has successfully liberated two neighborhoods in the western part of Mosul from the control of the Islamic State terror group (ISIL or Daesh, outlawed in Russia), the commander of the Mosul offensive said Wednesday.

"The servicemen liberated the neighborhoods of Sadeh and Ahmadiya in the old city on the right bank [western Mosul] and raised the Iraqi flag over the buildings," Lt. Gen. Abdul Amir Yaralla said.

Iraqi Army Wins Back Mosul District in Battle Against Daesh
On Tuesday, Commander of the Federal Police Forces Lt. Gen. Raed Shaker Jawdat said that since Iraqi troops were actively liberating the city, "the victory announcement will come in a very short time."