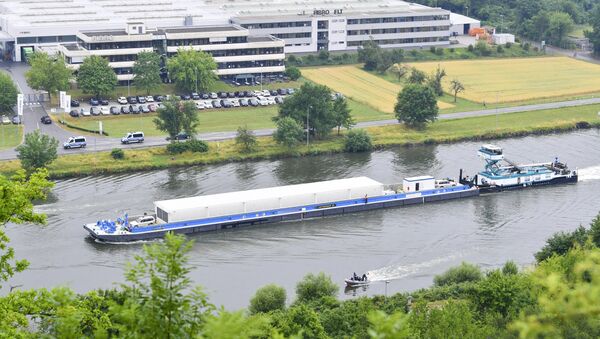 Environmental activists hanging themselves off a bridge temporarily stopped a ship transporting nuclear waste via a river on Wednesday.

Following the news that nuclear waste from a decommissioned power plant would be, for the first time, transported via ship down a river in Germany, protesters — citing pollution and environmental concerns — were able to briefly halt the voyage by hanging off a bridge, blocking the ship's progress, according to a report from Deutsche Welle.

Transiting the Neckar River, the specially designed watercraft with three containers of highly radioactive waste is the first such shipment of the dangerous material to be sent using the country's waterways, and environmentalists are not happy about it.

Prominently displaying a banner reading "prevention instead of relocation," four members of Robin Wood, an environmental group, swung down on ropes from the railing of a bridge over the Neckar — close to the southern German town of Bad Wimpfen, about 40 miles from the French border — causing the ship to come to a halt.

Police with special training to mitigate popular protest tactics, including the methods of Robin Wood, were called in to bring the protesters back to dry land and allow the ship containing the toxic substances to continue.

The specially-designed ship departed from the shuttered Obringheim nuclear power plant, traveling to a temporary storage facility in Neckarwestheim, according to Dw.com.

The 31-mile journey took 13 hours — one hour more than planned — due to the actions of the protesters.

Hundreds of less-adventurous protesters lined the river bank as the the boat sailed by.

Pointing out that carrying highly toxic nuclear waste by river is, at best, dangerous and irresponsible, the protesters also criticized methods used by energy authorities to measure radiation levels along the route.

Anti-Atom Organization activist Jochen Stay labeled the use of a river to transport deadly radioactive material as "an act of irresponsibility beyond compare," cited by Dw.com.

The Environment Ministry for the state of Baden-Württemberg responded to the protests by claiming that the toxic waste was "perfectly transported."

The owner of the decommissioned nuclear power plant announced recently that five additional nuclear waste river transits were in the works.