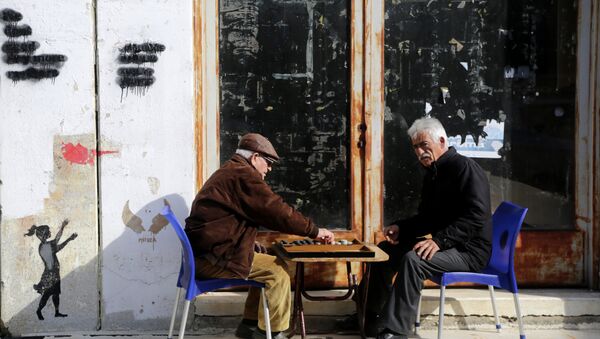 © AP Photo / Petros Karadjias
Subscribe
British Foreign Secretary Boris Johnson has been in Switzerland where talks are resuming in an attempt to reunify Cyprus. The island has been partitioned since 1974 and "a Turkish Cypriot 'yes' remains far more likely than a Greek Cypriot 'yes,'" an expert told Sputnik.

But Mr. Johnson was reported to have left Geneva on Wednesday (June 28) afternoon in order to return to take part in a crucial vote in Parliament on the Queen's Speech.

Have been in Switzerland for #ConferenceOnCyprus. With flexibility & creativity, we have a real chance for a settlement. UK ready to support

Why did you leave Mr @BorisJohnson? #UK has a responsibility towards #Cyprus https://t.co/1nPtxkrG6V

#Cyprus conference: Departure of @BorisJohnson not as being suggested bad omen at all. He needs 2 b back in #UK for #QueensSpeech am told.

In 1974, Turkey invaded the north of the island, coming to the rescue of the Turkish Cypriot minority after a far-right Greek nationalist group mounted a coup and tried to enact "enosis" — or union — with Greece.

The EOKA-B group, led by Nikos Sampson, had made blood-curdling threats to remove Turkish Cypriots from the island.

Some of our group in #CransMontana this morning and yesterday at the airport, demanding #UniteCyprusNow pic.twitter.com/Uh99XCIVvl

The Turkish Army occupied the northern third of the island and Turkish Cypriots later proclaimed the Turkish Republic of Northern Cyprus (TRNC).

Turkey maintains military presence in TRNC, which is only recognized by Ankara as an independent state.

President Nicos Anastasiades and the TRNC leader, Mustafa Akinci, have been involved in the UN-led reunification talks since May 2015. 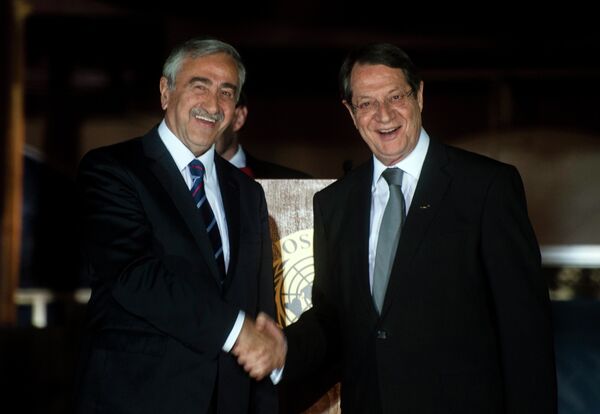 In May, President Anastasiades said another plebiscite could be held on the deal, similar to the one on the Annan Agreement in 2004.

"If we can meet the concerns regarding the security and guarantees and if we manage to find a solution as regards the territorial adjustments, then we are going to be free to discuss the remaining unresolved issues," he told Sputnik.

Britain, the former colonial power, is a guarantor of Cypriot independence, hence Mr. Johnson's role in the talks in Geneva on Wednesday.

Britain also retains an army and air force base on the island in what are known as Sovereign Base Areas.

The Cyprus talks, under the umbrella of the UN, have been making slow headway since 2015, but in January the two sides said significant progress had been made.

Reunification would mean the world's last divided city, Nicosia — known as Lefkosia to the Turkish Cypriots — being reunited. 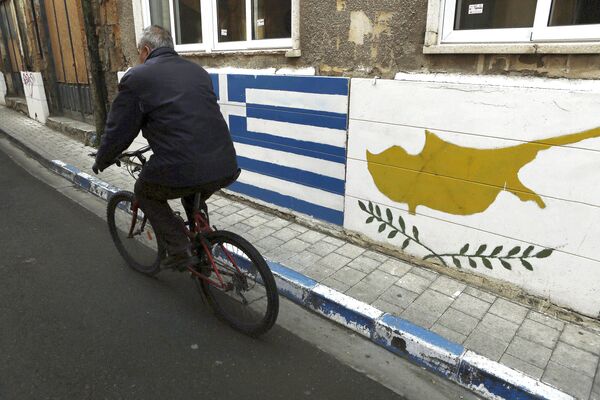 A man passes with a bicycle outside of a Greek Cypriot guard post with Cyprus', right, and Greece' flags painted on the wall in central divided capital Nicosia in the eastern Mediterranean island of Cyprus, on Thursday, Feb. 16, 2017
© AP Photo / Petros Karadjias

Two of the main obstacles are the presence of the Turkish Army and also the future of thousands of Turkish settlers who were brought to the island from Anatolia in the last 40 years.

Thousands of Greek Cypriots fled their homes in the north of the island and a smaller number of Turkish Cypriots left their villages in the south.

I hope #CyprusTalks tomorrow will be fruitful — a historic chance for reunification. Flexibility is needed & EU role will be critical! pic.twitter.com/JIvG3wO0le

"The way I understand it is that both sides seem to agree that the best way of solving the problem is to compensate as many people as possible, which would minimize the number of people who have to move out of the house they are currently living in," Dr. Hubert Faustmann, a professor of history and political science at the University of Nicosia and director of the office of the Friedrich-Ebert Foundation told Sputnik.

"But the problem is that the cost will be very, very high. The original estimate was £20 billion (US$25.6 billion), more recently that went down to £10 billion (US$12.8 billion), but that is a huge burden for the island," he told Sputnik. 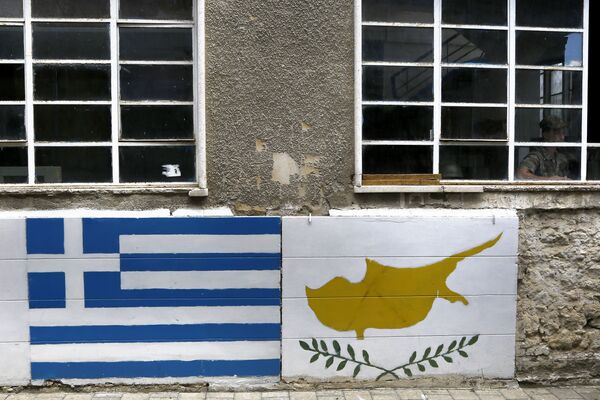 A representation of the Greek, left, and Cyprus flags are painted on a wall as a Greek Cypriot soldier is seen inside a guard post by the U.N controlled buffer zone as they cuts across the Cypriot divided capital Nicosia
© AP Photo / Petros Karadjias

Dr. Faustmann said the presence of the Turkish soldiers was the most difficult obstacle to peace and reunification.

"There are ways around it. One model discussed is a limited number of troops to remain, not under the command of Turkey or Greece but maybe as part of an international peacekeeping force."

The buffer zone in Cyprus. The island has been divided since the 1974 war. Today the two sides are negotiating the terms of reunification. pic.twitter.com/B6zIO7zWrB

He said the recent discovery of oil and gas off the coast of Cyprus should work as a "catalyst" but so far it had not helped.

"Potentially it is a carrot for both sides because they can probably only be exploited properly if there is a solution and it would turn the hydrocarbons into a win-win solution… it is clearly an incentive," Dr. Faustmann told Sputnik. 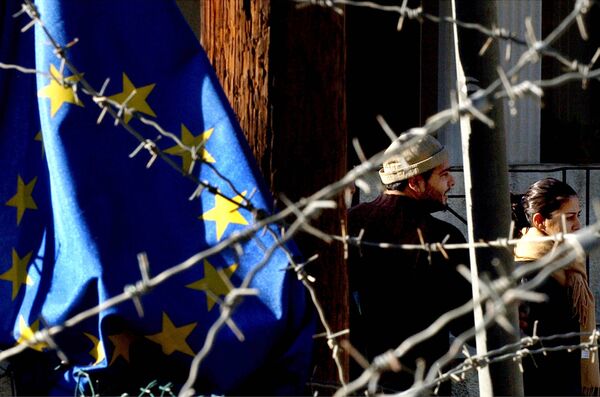 Dr. Faustmann said any deal which was agreed in Geneva had to be passed by both communities in referendums.

"A Turkish Cypriot 'yes' remains far more likely than a Greek Cypriot 'yes' for a number of reasons. It will be, if the security deal is not a very good one, very hard to pass any solution in the south of the island." 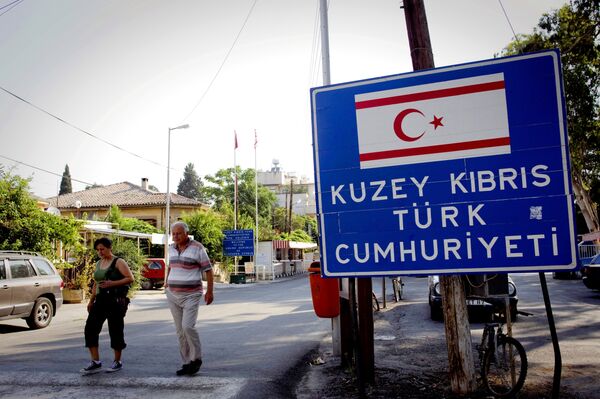 A couple walk through the buffer zone as they cross from the Turkish-controlled northern Nicosia to the Greek side of the Cypriot capital via Paphos Gate pedestrian border crossing on June 28, 2012.
© AFP 2021 / Behrouz Mehri

Dr. Faustmann also said it was unclear what role Mr. Johnson would play in the talks but he said:

He said the international community was clearly trying to influence both sides to agree a deal but he said nobody really had enough "leverage" to persuade either the Greek Cypriots or the Turkish Cypriots to agree a deal.

000000
Popular comments
Didn't Nuland move from Ukraine to Cyprus, demanding that Cyprus turns her back on Russia and hands over the Island to Turkey. The Non-NATO Island, who Theresa May, stated she was happy to hand over the UK military base, in the Greek Cypriot side of the Island, to Turkey, under the guise of NATO Forces on the non-NATO Island. Easy isn't it and they hope by handing Cyprus to Turkey, will mess up the closeness between Turkey and Russia and more importantly Turkstream. Do not know how Turkey siding with Qatar comes into it? Remember, Pyatt is in Greece and the EU have signed the Israel/EU Pipeline agreement, which counts on the gasfields found off Greece and Cyprus. It is all a con and what did Kissinger say? Those who control Crete, Malta and Cyprus, control the world. Poor Cyprus, they are really selling you out.
anne00marie
28 June 2017, 20:15 GMT
000000
Newsfeed
0
New firstOld first
loader
LIVE
Заголовок открываемого материала
Access to the chat has been blocked for violating the rules . You will be able to participate again through:∞. If you do not agree with the blocking, please use the feedback form
The discussion is closed. You can participate in the discussion within 24 hours after the publication of the article.
To participate in the discussion
log in or register
loader
Chats
Заголовок открываемого материала
Worldwide
InternationalEnglishEnglishMundoEspañolSpanish
Europe
DeutschlandDeutschGermanFranceFrançaisFrenchΕλλάδαΕλληνικάGreekItaliaItalianoItalianČeská republikaČeštinaCzechPolskaPolskiPolishСрбиjаСрпскиSerbianLatvijaLatviešuLatvianLietuvaLietuviųLithuanianMoldovaMoldoveneascăMoldavianБеларусьБеларускiBelarusian
Transcaucasia
ԱրմենիաՀայերենArmenianАҧсныАҧсышәалаAbkhazХуссар ИрыстонИронауОssetianსაქართველოქართულიGeorgianAzərbaycanАzərbaycancaAzerbaijani
Middle East
Sputnik عربيArabicArabicTürkiyeTürkçeTurkishSputnik ایرانPersianPersianSputnik افغانستانDariDari
Central Asia
ҚазақстанҚазақ тіліKazakhКыргызстанКыргызчаKyrgyzOʻzbekistonЎзбекчаUzbekТоҷикистонТоҷикӣTajik
East & Southeast Asia
Việt NamTiếng ViệtVietnamese日本日本語Japanese中国中文Chinese
South America
BrasilPortuguêsPortuguese
NewsfeedBreaking
08:04 GMTMysterious Blast in Delhi Court Leaves One Injured - Video
07:56 GMTMan Died After 'Very Rare' Reaction to AstraZeneca COVID Jab, Inquest Told
07:49 GMTFrom Ariana Grande & BTS to William Shatner & Cristiano Ronaldo: Celebs Set Guinness World Records
07:30 GMTGOP Senator Urges Biden Not to Rule Out 'First Use Nuclear Action' Against Russia Over Ukraine
07:29 GMT'Quite Dramatic': Norwegian Churches Go Cold Amid High Electricity Prices
07:17 GMTJanuary 6th Events Panel to Vote on Contempt Charges Against Trump's Ex-Chief of Staff Next Week
06:43 GMTNorway Sees Record Number of Daily COVID Cases During Entire Pandemic
06:43 GMTUS Considers Energy Sanctions Against Russia as Last Resort, Reports Say
06:43 GMT'Final Moments' Before Helicopter Crash That Took Life of Indian Defence Chief Rawat Caught on Video
06:29 GMTNigerian President Hopes for Private Talks With Putin at Russia-Africa Summit, Ambassador Says
06:24 GMTTwo Democrats Join 50 Senate Republicans in Vote to Throw Out Biden's Vaccine Mandate
05:54 GMT'It P***** Me Off: Barcelona Boss Xavi Slams His Own Team as Catalans Are Relegated to Europa League
05:42 GMTBoJo Faces Tory Pressure Over Alleged Illicit No 10 Christmas Bash, Plan ‘B’ COVID Restrictions
05:24 GMT'God Giving a F***': Swedish Transport Administration Mural With Female Genitalia Sparks Outrage
05:05 GMTPentagon Refuses to Comment on Possible Anti-Iranian Drills With Israel
04:48 GMTWatch Coast Guard Diver Pull Body From Car Stuck at Brink of Niagara Falls
04:21 GMTMagnitude 6.0 Earthquake Strikes Off Southwestern Coast of Japan, Seismologists Say
04:12 GMTElon Musk Warns About Lots of 'Accounting Trickery' in Biden’s Build Back Better
03:43 GMTPro-Choice Coalition Unveils Plan to Expand Abortion Access in California
03:42 GMTHouse Dem Leaders Mulling Response to Boebert-Omar Feud as 'Squad' Wants Blood - Report