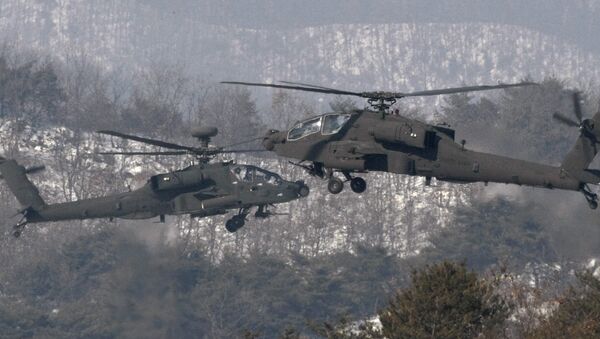 © AP Photo / Ahn Young-joon
Subscribe
International
India
Africa
The US Army and defense contractor Boeing have joined the Israeli Air Force in investigating a crack found earlier in June in the the rear rotor of an IAF AH-64 Apache helicopter.

The three parties are reportedly working together to find what caused the crack, which could potentially pose a safety issue during flights.

"It’s a very thorough investigation," a defense source told Defense News. "We’re checking all the rotors, and that could take another few weeks … At this point, we can’t point with certainty as to what caused the crack. It could be a matter of imprecise production or flaws in the layers of [the blade’s] complex material."

The damaged rotor is undergoing a series of tests by the force’s central maintenance unit.

Israel’s fleet of Apaches has been grounded since June 13, when the investigation began, and the Tel Aviv says the aircraft will not become operational again until the

IAF commander Maj. Gen. Amir Eshel made the decision to ground the fleet, which includes a combination of A- and D-model Apaches, the oldest of which is 31 years old.

Eshel said at the time, "The plan is to conduct a comprehensive investigation in order to make a decision for how to proceed with the [Apache] system,” according to the Times of Israel.

"The investigation in regard to the crack that was found in the blade of the tail rotor is still underway," an Israeli military spokeswoman said on Monday. "The Apache Squadrons will continue being grounded until the investigation is completed and all the aircraft are approved for flight. The findings of the investigation are openly being analyzed with senior commanders in the Air Force."

During the Second Lebanon War in 2006, two crewmembers were killed after a rotor malfunction caused an IAF AH-64D helicopter to crash. Apaches were an important component in the conflict, in which the IDF targeted Hezbollah militants.