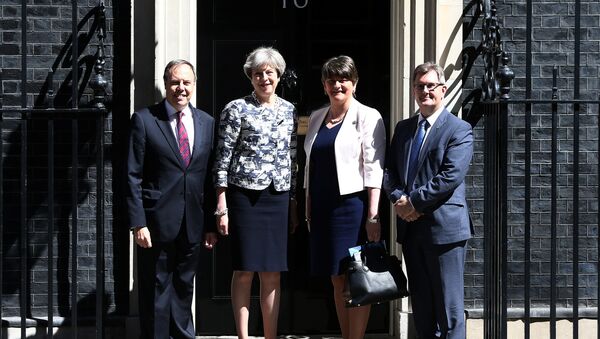 The Conservative Party and Ulster’s Democratic Unionist Party (DUP) have established a coalition, cementing the political unity in not only the UK Parliament, but also that of Ulster and the UK. The UK cabinet, on their part, introduced a fiscal stimulus for Ulster, which will improve the regional economy and curb the nationalist drive there.

Theresa May's Deal With the DUP - Mad, Bad, and Extremely Sad
Kristian Rouz – UK Conservative Party and Ulster’s Democratic Unionist Party (DUP) have reached an agreement that will provide financial support to Northern Ireland in exchange for the political unity in the Palace of Westminster.

After the ‘hung Parliament’ outcome of the June 8 general election, the Tories require support from the DUP in order to successfully conduct the Brexit negotiations with the European Union officials. Now, Brexit brings immediate economic benefits to Ulster, which voted ‘Remain’ in last year’s referendum.

The UK Prime Minister’s office announced they have reached an agreement with the Northern Irish unionists, which is crucial in enforcing PM Theresa May’s Brexit agenda. The agreement strengthens the ties between the Tories and the DUP, ensuring the coalition’s majority in the Parliament, and allowing the two parties to form a new cabinet under the leadership of Theresa May.

“I welcome this agreement which will enable us to work together in the interest of the whole United Kingdom, give us the certainty we require as we embark on our departure from the European Union, and help us build a stronger and fairer society at home," Theresa May commented on the agreement.

The pact consists of two separate documents, the Confidence and Supply Agreement between the Conservative and Unionist Party and the Democratic Unionist Party, and the UK Government financial support for Northern Ireland.

The former outlines the contours of political cooperation between the Conservative Party and the DUP, providing that the DUP will “support the government on all motions of confidence,” including the matters of fiscal and monetary policies, foreign policies, and the ongoing process of modernising and improving Ulster’s politics. The latter provides up to £200 mln per year in infrastructure spending, and an additional £50 mln per year in health and education spending from the UK’s budget to Northern Ireland, which will, according to preliminary estimates, increase the well-being of the Norther Irish by £530 per person over the coming two years.

“I saw it described, ridiculously today, as some kind of bung to the DUP. The DUP is not getting this money. The money is going to invest in the people of Northern Ireland,”  UK Defence Secretary Sir Michael Fallon said. “We all as taxpayers, wherever we are, in England, Wales and Scotland, we all have an interest in Northern Ireland doing better.”

Northern Ireland has for decades been torn apart by sectarian and political woes, where the nationalist Catholic-oriented Sinn Fein has been favouring Ulster’s reunification with the Republic of Ireland, whilst the Protestant unionists have seen the Queen of England as the ultimate guarantor of their rights to religious and political self-expression. Republic of Ireland in part of the EU, and last year’s vote in Ulster, favouring ‘Remain’ over ‘Leave’ stirred a hazardous situation, making a return of the long-lasting political turmoil, known as ‘the Troubles’, quite possible.

UK PM May Signs Deal With Northern Irish DUP to Get Support for Minority Gov't
Now, the Tory-DUP deal provides that Ulster unionists’ voices will be heard louder all across the UK, to the sheer disgruntlement of the political left and the Scottish National Party (SNP), among others. The deal brings significant economic benefits to Northern Ireland, meaning the Republic of Ireland and Ulster nationalists will be having a lesser influence on Ulster in the years to come.

While the Conservative Party has cemented their electoral victory in the latest election, allowing the May cabinet to be more confident in the matters of foreign policy, the Tory-DUP deal contributes to a greater political stability within the UK. Besides, the economic part of the pact is in fact a limited fiscal stimulus package, which will contribute to a quicker economic growth and job creation in Ulster.

As the Bank of England (BOE) prepares to start normalising the UK monetary policies, Downing Street has been considering implementing a broader fiscal stimulus across the UK for almost a year. However, as UK economic growth, despite a slight slowdown, has remained quite robust, the plans of an increased overall budget spending and scrapping the austerity measures, have been subject to delays in the recent months.