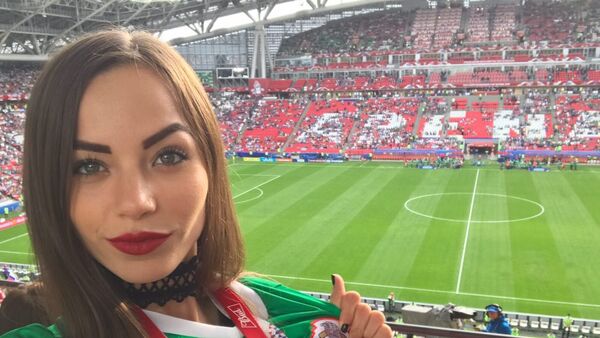 On Instagram she is known as Mrs. Pavola to her 1.2 million followers. She is also a host of “Ridiculos MTV 2” and one of the most popular models in Mexico and Latin America.

Pavola came to Russia to support her national team and spoke about her experience in the country.

“We came with one of the official sponsors of the championship. The company brought various social network stars to Russia so that we can show our subscribers how we spend time in Russia during the tournament,” Pavola told Sputnik Mundo. 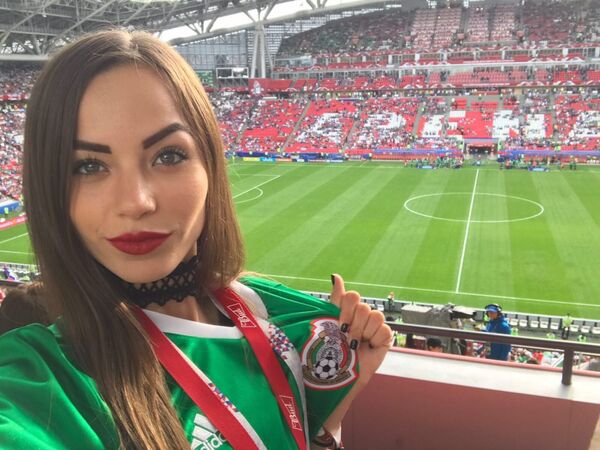 Melanie Pavola
© Photo : Melanie Pavola
She said that the atmosphere during the match between Mexico and Russia was very warm and friendly.

“It was a very friendly atmosphere, and we were fooling around with Russian fans. They shouted ‘Russia!’, and we shouted ‘Mexico!’, and then vice versa. Together we laughed a lot, it was a great experience,” the model said.

Pavola said that although she really wants Mexico to win the final cup, she feels that Germany has a shot at winning.

Talking about her own love for sports and fitness, the Instagram star said that she enjoys all sorts of fitness activities such as yoga, jogging and fitness training.

“In fact, I do fitness most actively, much more actively than modeling. This is something that I really love. Playing sports for me is an amazing experience,” Pavola said.

Talking about her visit to Russia, she said that she adores Vladimir Putin.

“I like that he is involved in many sports. He is one of the wisest presidents there is in the world right now because Trump, Peña Nieto and Kim Jong-un simply can destroy it [world].”

She further said, “I really liked Russia, its history, people, culture, beautiful women, amazing architecture… and I admire the way Russians do not succumb to the pernicious influence of capitalism,” Pavola concluded.

Supporters from seven countries participating in the tournament, namely Portugal, Mexico, New Zealand, Germany, Australia, Cameroon and Chile, admitted that "it feels like home" in Russia and praised the country for its warm welcome.

000000
Popular comments
She admires President Putin and speaks well of Russia, so she is probably okay. Hardly 'stunning' though.
Medvezhonok
27 June 2017, 22:59 GMT2
000000
I bet her breath stinks like Lucifers farts, anybody that skinny would have pre-brekky breath.