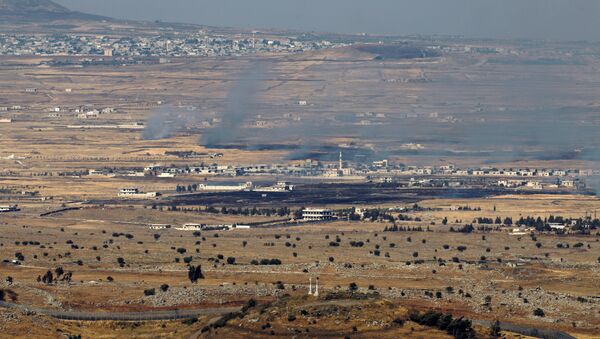 Over the past weekend, the Israeli military carried out several attacks on positions of the Syrian Army at the Golan Heights.

Possible Reason Why Israel Struck Syrian Army Position in Golan Heights
On Sunday, the Israeli Defense Forces (IDF) attacked Syrian Army positions and an ammunition truck "in response to several Syrian projectiles" launched from Syrian territory. Earlier in the day, the IDF reported that several projectiles launched from the Syrian side fell in the Israeli-controlled part of the Golan Heights, causing no injuries.

A source told Sputnik that the Syrian forces were repelling a massive al-Nusra Front terrorist attack in the Golan Heights when they were struck by the Israeli Air Force in the area. According to Al Mayadeen channel, at least two Syrian soldiers were killed in the airstrike.

In an interview with Sputnik, Syrian military and strategic expert Maj. Gen. Yahia Suleiman commented on the incidents.

Suleiman suggested that by launching attacks on Syrian forces, Israel plays into the hands of terrorists.

The general claimed, "Many injured militants travel to Israel for treatment, a fact admitted both by the militants and Israelis."

Iran's Strikes on Daesh in Syria a 'Warning to Israel, US and Saudi Arabia'
"Moreover, by attacking Syrian forces, Israel indicated that it would not give up supporting militants and would further protect them," Suleiman claimed.

The general also shared his thought on what goals Israel may be pursuing with its military activities in the Golan Heights.

"Their plan is to establish a buffer zone in the Golan Heights, similar to the one they tried to establish in southern Lebanon. But this plan will not work out, just like they failed to do that in Lebanon," he said.

According to Suleiman, Israel’s "aggression" against Syria is "part of a plan" on destabilizing Syria and weakening Damascus’s allies.

"Damascus is not interested in war with Israel but it doesn’t mean that the Syrian military will not respond to this aggression," he concluded.

Israel Intercepts Airborne Target Over Golan Heights - IDF
On Saturday, the Israeli Air Force launched an attack on Syrian government tanks and artillery positions after 10 projectiles fell on the Israeli-controlled part of the Golan Heights.

A similar incident also took part in the Golan Heights a week ago. The majority of such incidents are described by the Israeli military as accidental overspills during clashes between the Syrian government forces and militant groups.

In November, the IDF said a missile believed have been launched from Syria, hit the Israeli-controlled northern Golan Heights without causing any casualties. Israeli forces responded with retaliatory fire.