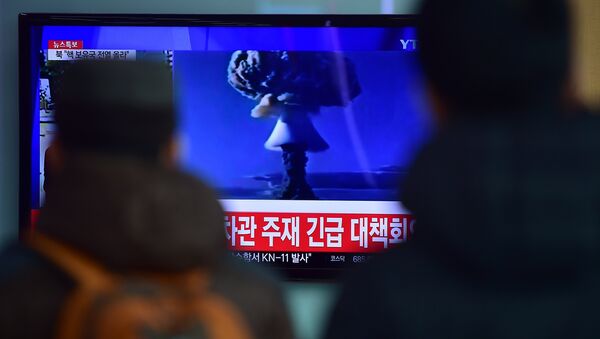 Pyongyang has demonstrated its ability to produce hydrogen-3, a radioactive isotope of hydrogen also known as tritium that’s “necessary for a hydrogen bomb to create fusion,” a Stanford University professor said Tuesday.

“The evidence is quite clear,” professor Siegfried Hecker told Yonhap News Agency on June 27, “that North Korea is able to produce tritium,” based on their experience making lithium-6, a central component for creating hydrogen-3. Since the North Korean military can create tritium, they have the “basic element” needed for thermonuclear weapons like the H-Bomb, Hecker said.

However, “it takes much more than that to weaponize hydrogen bombs,” the nuclear scientist said. North Korean leader Kim Jong-un has long made clear, however, his intention to develop a nuclear weapon regardless of pressures or sanctions from the international community.

Fusion combines hydrogen isotopes in a reaction that produces more energy, which causes other hydrogen atoms to merge; the process escalates by orders of magnitude. The earth’s sun is a natural fusion reactor, for example.

When Pyongyang was beating the war drums in March 2016, DPRK Today reported that Pyongyang had an H-Bomb “much bigger than the one developed by the Soviet Union.” If the warhead were attached to an intercontinental ballistic missile, North Korean officials threatened, it would “fall on Manhattan in New York City, [and] all the people would be killed there instantly.”

Hecker has estimated the DPRK’s nuclear warhead stockpile to stand at about 25, according to Yonhap, and he thinks the North Koreans can likely churn out about six to seven more each year.

Pyongyang isn’t naïve, Schilling noted, and thus might not test an intercontinental ballistic missile (ICBM) publicly even if it were capable of carrying out such a test. Medium-range ballistic missile tests can be useful for developing the components that go into ICBM technology, the analyst said, noting “the possible testing of ICBM subsystems in this low-key manner may be a North Korean hedge.”