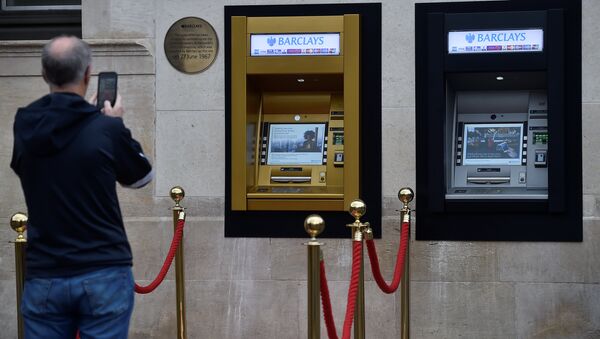 © REUTERS / Hannah McKay
Subscribe
The world’s oldest cash machine was 50 years old on Tuesday (June 27) and despite technological advances ATMs are as popular as ever. Barclays Bank unveiled the first hole-in-the-wall machine at their branch in Enfield, north London on June 27, 1967.

Happy 50th Birthday to the #ATM Opened on this day in Enfield North London in 1967 by the one & only Reg Varney from #OnTheBuses pic.twitter.com/BoANp8xTHh

​Last year £175 billion (US$222 billion) was withdrawn globally and ATMs can be found all over the world.

The world's most northerly cash machine is in Longyearbyen on the Norwegian island of Svalbard and there is also one at the McMurdo station at the South Pole.

The Vatican City even has one which gives instructions in Latin. Earlier this year, the Indian aircraft carrier INS Vikramaditya was fitted with a satellite-operated ATM.

Cash machines in Wales are fitted with a Welsh option while in Scotland a tiny number have a Gaelic option.

In the run-up to the 2012 London Olympics several machines in the capital were fitted with a cockney rhyming slang option which enabled people to withdraw their "sausages and mash" (cash).

Barclays has painted the ATM to mark its golden anniversary and installed a commemorative plaque.

The ATM was the brainchild of John Shepherd-Barron, who Barclays commissioned to create six cash dispensers.

The unveiling of the new machine was a big event in 1967, and actor Reg Varney, who starred in hugely popular sitcom On the Buses, carried out the official opening. 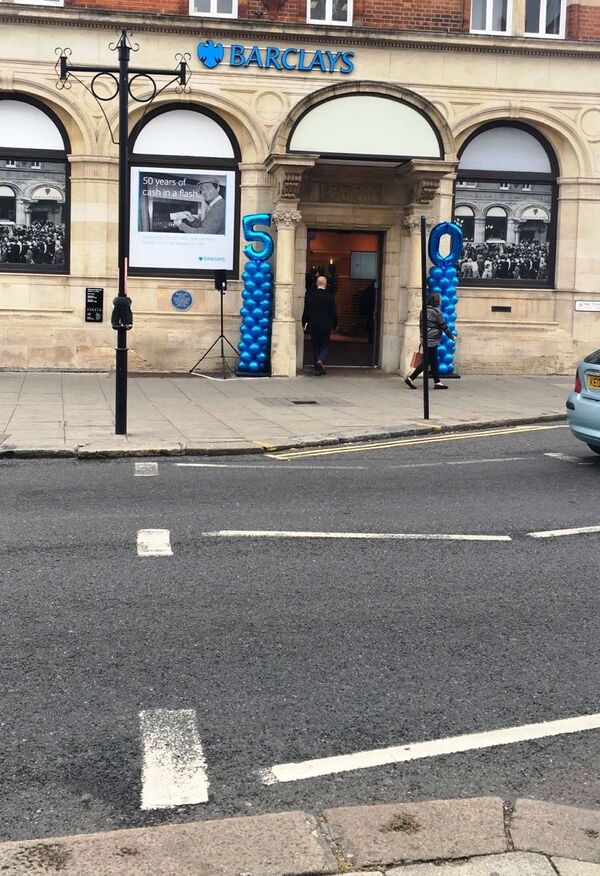 Balloons decorate the outside of the Barclays bank branch in Enfield, north London, where the world's first ATM was installed in 1967.
© Sputnik / Chris Summers

Raheel Ahmed, Head of Customer Experience at Barclays, said: "Even though recent years have seen a huge uptake of digital banking and card payments, cash remains a crucial part of most people's day-to-day lives — whether it's paying for groceries or doing the office coffee run — and we're very proud of the role that Barclays has played in the history of the cash machine.

"From launching the world's first ATM back in 1967, to becoming the first UK bank to offer contactless and mobile cash withdrawals in 2016, Barclays has always been at the forefront of innovation, committed to making life easier for our customers by saving them time on their everyday banking needs."

Occasionally ATMs go rogue and either spew out money or swallow cards.

In April this year, a bank in Seattle handed a woman a counterfeit US$20 bill which had the phrase "Motion Picture Use Only" printed on it.

"In the emerging world ATMs have a lot of added functionality. In India they are used to apply for loans and even to pay back your loans. But ATMs in the UK have not changed their functionality a great deal," Tanya Andreasyan, editor of Banking Technology, told Sputnik.

Today is 50th anniversary of the 1st ATM at Barclays in Enfield Middx. Always shield your PIN when using an ATM #ATM @OnTheBusesStan pic.twitter.com/kD8iZNVixq

​Most ATMs in Britain do not charge customers as there is a LINK network agreement between banks, while in the United States most cash machines charge a fee.

"Cash is still very popular and it's still expensive for small businesses to process cards so, all in all, I think we will still have ATMs in the future," Ms. Andreasyan said.

To celebrate the ATM’s #goldenanniversary — an iconic moment in banking — Barclays is turning the Enfield cash machine into a local landmark pic.twitter.com/82u5TprqIp

​"They may be touchscreen or voice-activated or maybe fingerprint-activated, but I think we will still have them in 50 years' time," she added.

But Ms. Andreasyan said there will always be criminals trying to get money from them too.

"If anything can be used to defraud people it will be. Whether it's online fraud or cashpoint fraud, there are always criminals who will try to beat the system and the banks are always playing catch-up."

The ATM turns 50 — It all began with a newfangled bank machine in Enfieldhttps://t.co/X9Rnhcywqd pic.twitter.com/H8fFfeZV5F

​"If someone stands and looks over your shoulder and sees your PIN number there's nothing you can do but banks do everything they can to make ATMs safe to use," she told Sputnik.

Earlier in June, a murder trial in London heard how a Sri Lankan Tamil gang were living on the proceeds of cash machine fraud.