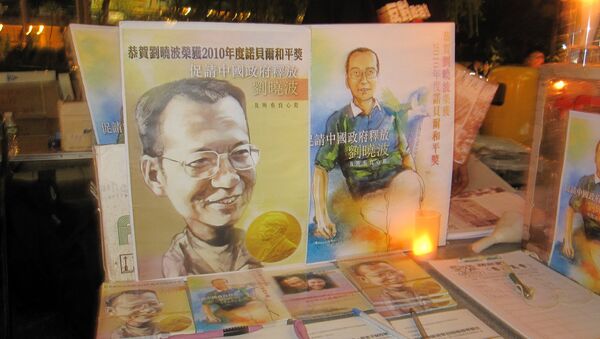 © Flickr / Charles Mok
Subscribe
Following the request made by US officials to grant the freedom of movement to imprisoned Nobel laureate Liu Xiaobo, who recently was diagnosed with cancer, China's Foreign Ministry spokesman Lu Kang said Tuesday that the United States should refrain from interfering in China's domestic affairs.

Norway, China to Restore Ties After 2010 Row Over Nobel Prize for Liu Xiaobo
BEIJING (Sputnik) — In May, Liu was diagnosed with late-stage liver cancer and was allowed to be transferred out of the prison to receive the necessary treatment in a hospital. On Monday, Liu's lawyer told Sputnik that the dissident was still under control of the Chinese government, and that his medical parole was just another form of imprisonment. The lawyer added that his family members had been allowed to visit him almost two weeks ago.

Earlier on Tuesday, a spokeswoman for the US embassy in Beijing called on Chinese authorities to not only release Liu but also to allow his wife, out of house arrest, providing them with freedom of movement and access to medical services. US Senator Marco Rubio also called on US President Donald Trump to seek Liu's immediate humanitarian transfer to the United States.

"It is China's internal affair, and any country does not have a right to intervene in China's domestic affairs and make unfounded statements. China is a law-based state, where everyone is equal before the law. All the other countries should respect China's judicial sovereignty and should not intervene in interior affairs under the pretext of so-called individual cases," Lu said at a briefing, stressing that there was a special legislation regulating the movement of Chinese citizens who want to leave the country.