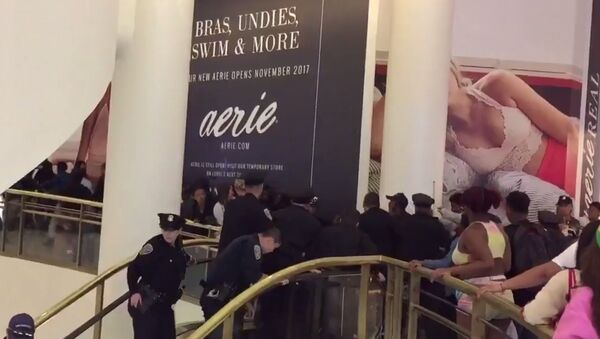 © Twitter
Subscribe
International
India
Africa
A mall in downtown San Francisco was forced into temporary lockdown Sunday evening after a large fight broke out. Authorities say several people were detained as a result of the brawl.

The fight began among about a dozen people in the food court, and out from there, according to police. As it reached the second level of the building, officers were attacked as they used the escalator to reach the crowd and stop the fight. In one video, an object can be seen flying through the air into a group of police, striking one officer in the face. Several other officers reportedly sustained minor injuries as well.

Officer Robert Rueca said the movement of the fight "Did complicate matters and that's why we did have to stop the situation as soon as possible and that's why you see us moving to multiple levels in order to stop and detain these individuals that were involved in this incident," according to NBC Bay Area.

Some bystanders filmed the incident on their phones while others fled.

The fracas occurred after the city’s Pride parade, an event that annually brings thousands of people into San Francisco’s Market Street corridor, where the mall is located.

While officers tried to contain and deescalate the scuffle, Westfield was closed down as a safety precaution for a short time before closing early for the night.

Police say at least one juvenile has been arrested.