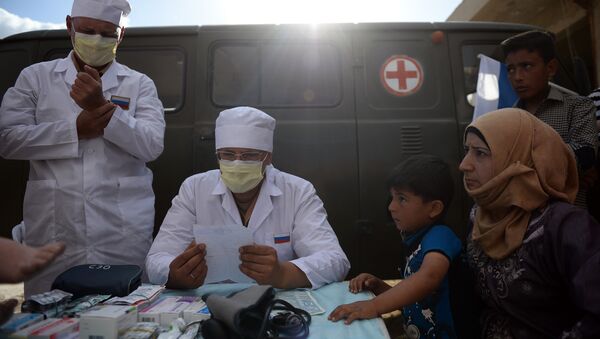 © Sputnik / Maksim Blinov
/
Go to the mediabank
Subscribe
International
India
Africa
A convoy of Russian military vehicles has brought food and medicine to a prenatal center in Al-Waer, a town in Syria’s central Homs province that was recently liberated from Daesh terrorists.

“We have brought hundreds of food rations and also medicine for the patients and staff of the Khalid al-Walid hospital, because we know that this is the first thing they need,” Ilya Volovitsky, an officer at the Center for Reconciliation of the Warring Parties in Syria, told reporters.

He added that the Russian military has also brought along a team of doctors who immediately got to work tending to the patients.

Russia Donates Mobile Field Hospital to Syria
Volovitsky said that the town had been liberated early last month after lengthy negotiations the Reconciliation center’s officers held with the terrorists.

“The tense talks dragged out for about a month, up to 12 hours each day. We finally clinched a deal to let out over 10,000 terrorists.  At the designated time over 20,000 militants and their family members allowed to leave the town,” Volovitsky recalled.

In an interview with Sputnik, the hospital’s head physician Samih Sharbik said that for the past five years the militants had used the Khalid al-Walid center as a military hospital thus preventing the personnel of one of the country’s main preinatal centers from exercising their professional duties.

Dr. Sharbik added that the terrorists had left the hospital in a sorry state with the windows all shattered and the walls pocked with dents and holes from bullets and exploding shells.

The jihadists used the upper floors as firing points and the ground floor as operating rooms. On their way out they destroyed all the medical equipment the hospital had.

This is Why Syria Still Needs Russian Troops' Help
Dr. Sharbik still believes that with government help the staff of the prenatal center in Al-Waer will take maximum three months to resume work tending to birthing mothers from all across the province.

Since 2011, Syria has been engulfed in a civil war, with government forces fighting against numerous opposition and terrorist groups, including al-Nusra Front and Daesh, banned in many countries, including Russia.

According to the UN data, nearly 6.3 million Syrians have been displaced and 4.9 million people, mostly women and children, have been forced to seek refuge since the start of the violent conflict almost six years ago.