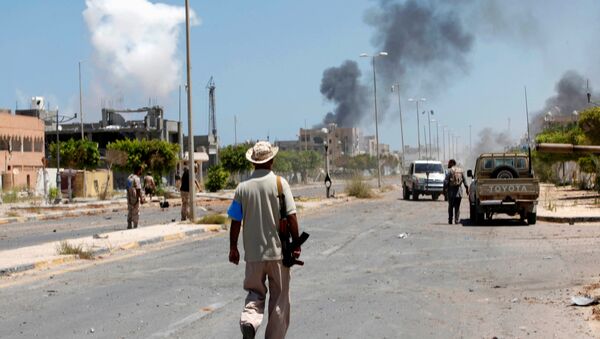 © REUTERS / Ismail Zitouny
Subscribe
International
India
Africa
The number of cases of human trafficking has increased in recent years in Libya, according to the head of the Tunisian Observatory for Human Rights, Mustafa Abdel Kabir, who recently published this information on his blog.

RT’s Series of Reports From Libya Wins Gold at International Film Festival
In Kabir’s opinion this situation threatens the national security of Libya and promotes the spread of terrorism throughout the region.

The head of the Libyan Human Rights Observatory, Nasr al Hauari, in an interview with Sputnik confirmed Kabir’s statements and said that the refugee crisis and the rise of slave trade is entirely true.

“Groups in the western part of the country are actually engaged in slave trade. The victims are refugees who want to travel to Europe. These people stay in illegal camps for refugees, from where the militants transfer them to Europe on cargo ships,” Hauari said.

He further said that 90 percent of the boats with refugees in them drown because of the unimaginable overload.

“The boat is designed for 50 passengers and it loads 400 people. Therefore every day there are bodies of drowned victims. Libya has become a key source of refugees and slave trade,” the head noted.

According to Hauari, all of this is happening due to the lack of a strong political power inside the country that could put an end to these groups and transfer them to the hands of the law.

Right now the militants are committing these crimes quite openly and are not even trying to hide their illegal activities.

“There is no government or army that could control the Libyan borders, especially in the south and at sea. Only the borders with Egypt and partly with Tunisia can be called protected but Libya has a border with six states,” Hauari said.

Africa
Over 1,700 Migrants Rescued Off Libyan Coast in 2 Weeks - IOM
According to the head, most of the refugees in Europe are from poor African countries and Syria.

"European countries must help these countries overcome poverty and crisis. After all, mostly these are former western colonies. They were used, their wealth was pumped out and nothing was done to improve people's lives,” Hauari concluded.

According to an IOM report published in June the annual number of migrants arriving in Europe has increased almost by 10,000, compared to 2013.

A total of 83,928 migrants and refugees arrived in Europe by sea in 2017, with the majority landing in Italy, the International Organization for Migration (IOM) reported.

"The UN Migration Agency (IOM) reports that 83,928 migrants and refugees entered Europe by sea in 2017 through June 21, with almost 85 percent arriving in Italy and the remainder divided between Greece, Cyprus and Spain. This compares with 215,997 arrivals across the region through 21 June 2016," the IOM press release read.

The IOM pointed out that 71,978 migrants arrived in Italy, while 2,011 people died en route to the country. The agency also registered 8,363 migrant arrivals in Greece.

According to the press release, a total of 2,108 migrants died in the Mediterranean while trying to cross the sea since January 1, which is less than that of the same period last year, when 2,911 people died en route to Europe.

Since 2015, Europe has been experiencing the worst migration crisis in its history, struggling to accommodate hundreds of thousands of refugees and migrants fleeing hostilities in the Middle Eastern and North African countries.