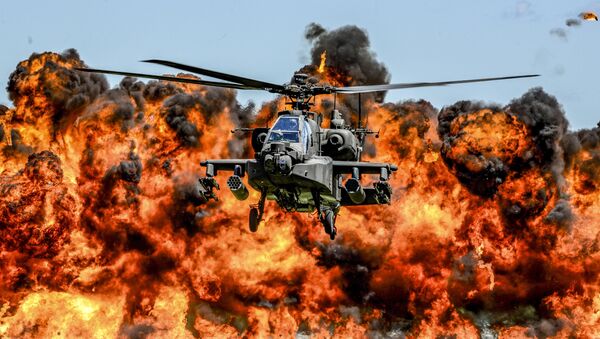 This is the "first time that a fully integrated laser system successfully engaged and fired on a target from a rotary-wing aircraft over a wide variety of flight regimes, altitudes and airspeeds," according to a statement from manufacturer Raytheon.

The helicopter was able to strike its target from 0.9 miles away, using a combination of the laser and an a sensor called the Multi-Spectral Targeting System, which the company says "provides long-range surveillance, target acquisition, tracking, range finding and laser designation" for projectiles.

The weapon’s silence and invisibility to the human eye makes its difficult for enemies to detect. The Defense Department described its precision as "a near-perfectly straight trajectory, unlike the arc of an artillery round, which allows the laser to be much more accurate in finding its target."

With the Apache’s hellfire missiles and 30mm machine gun coming in at $115,000 each, laser weapons may prove to be less expensive as well.

But lasers are not without their drawbacks, Ketner said, noting that the weapons have issues penetrating haze, dust and smoke, and require quite a bit of energy.

The US military has been increasingly interested in laser weapons despite this, with the Navy vessel USS Ponce utilizing a mounted laser since 2014. Powerful optics allows the Ponce’s Laser Weapons System (LaWS) to be used as a surveillance tool along with its offensive capabilities.

The Air Force announced in April that it’s working to place laser weapons on B-52 bombers as well, and plans to test a laser weapon on its AC-130J gunship.

National Defense quoted Air Force Special Operations Commander Lt. Gen. Brad Webb describing how lasers could be used in a raid scenario, saying, "Without the slightest bang, whoosh, thump, explosion, or even aircraft engine hum, four key targets are permanently disabled. The enemy has no communications, no escape vehicle, no electrical power and no retaliatory" capabilities.

The Army shot down drones using a laser last month as well, with Staff Sgt. Eric Davis saying he took out so many unmanned craft, he lost count, calling the weapon "extremely effective," according to Breaking Defense.