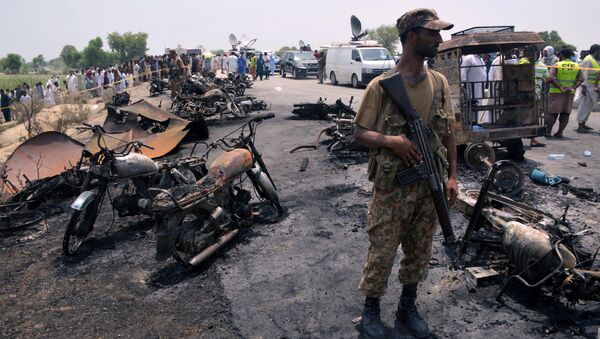 © REUTERS / Stringer
Subscribe
International
India
Africa
The United Nations is ready to provide Pakistan with all necessary assistance following a deadly fire caused by an oil tanker crash in the province of Punjab, Stephane Dujarric, a spokesman of the UN secretary-general, said in a statement.

Boat With 150 Tourists Aboard Sinks in Colombia (PHOTOS)
UNITED NATIONS (Sputnik) — On Sunday, the oil tanker crashed near Ahmedpur Sharqia, Bahawalpur in Punjab. The fire occurred when the locals gathered near the tanker to collect fuel that had leaked out of it. According to eyewitnesses, some people smoked cigarettes, which could have caused the fire. The blaze spread to dozens of vehicles.

"The Secretary-General is saddened to learn of the large number of deaths and injured following the explosion of an oil tanker near the Pakistani city of Ahmedpur East in Punjab's Bahawalpur district. The Secretary-General extends his condolences to the people and Government of Pakistan on this tragic event and wishes those injured a speedy recovery. The United Nations stands ready to endeavor to support the authorities with any support they may require," Dujarric said Sunday.

At least 152 people died and over 110 were injured as a result of the incident, media reported citing local authorities.