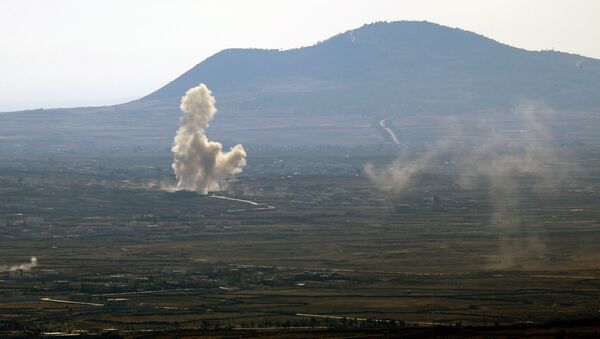 © AFP 2023 / JALAA MAREY
Subscribe
International
India
Africa
Israel conducted another attack on the positions of the Syrian Armed Forces in Golan Heights, the Syrian army said Sunday in a statement.

BEIRUT (Sputnik) — Earlier on Sunday, the IDF said that several projectiles launched from the Syrian territory fell in the Israeli-controlled part of the Golan Heights, causing no injuries.

The Syrian army stated that it was attacked by Israeli forces after repelling an assault from Jabhat al-Nusra terrorists in the Quneitra Governorate.

"After our armed forces successfully repelled a large-scale attack of Jabhat al-Nusra terrorists [Jabhat Fateh al-Sham terror group, banned in Russia] near the town of al-Baath in the vicinity of Quneitra… hostile Israel resumed its aggression and attacked one of our positions in order to support the terrorists and raise their fighting spirit," the statement read.

Israeli Forces Target Syrian Army Again After Projectiles Fall in Golan Heights
On Saturday, the Israeli Air Force attacked the Syrian government forces' tanks and artillery positions after 10 projectiles fell on the Israeli-controlled part of the Golan Heights. A source told RIA Novosti that the Syrian government forces were repelling a massive Nusra-Front terrorists' attack in the Golan Heights when they were struck by the Israeli Air Force in the area. According to Al Mayadeen channel citing a source, at least two Syrian soldiers were killed in the airstrike.