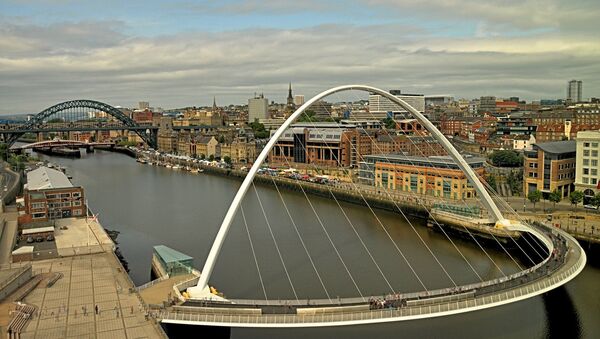 "WESTGATE SPORTS CENTRE UPDATE: It is now confirmed that their are six casualties," Northumbria police said.

The scene inside the car park of the sports centre on Westgate Road, where a child as reportedly been hit by a car pic.twitter.com/GYtL8a27gI

WESTGATE SPORTS CENTRE UPDATE: It is now confirmed that their are six casualties.

Police said that don't consider the incident to be terror-related.

I'm just arriving at the scene on Westgate Road pic.twitter.com/tLLZ838FIf

An arrest has been made after reports of the incident. According to media reports, a 42-year-old woman was detained and questioned by police.

The Westgate Sports Centre hosted an event dedicated to Eid celebrations. Eid al-Fitr marks the end of the holy month of Ramadan.

Finsbury Park Attacker Charged With Terrorism Related Murder, Attempted Murder
On the night of June 19, Darren Osborne, 47, rammed a van into pedestrians near a mosque at Finsbury Park in North London. Police said that at least one person was killed and 10 more were injured. This attack was the latest in the line of deadly terror incidents, which have shaken the United Kingdom over recent months. The Muslim Council of Britain said that the attack was directed at Muslims leaving Ramadan night prayers.

Previous attacks include two vehicle-and-knife rampages on London Bridge on June 3 and Westminster Bridge on March 22 in the capital and a bombing in Manchester on May 22. The three attacks claimed the lives of more than thirty people, leaving dozens injured.