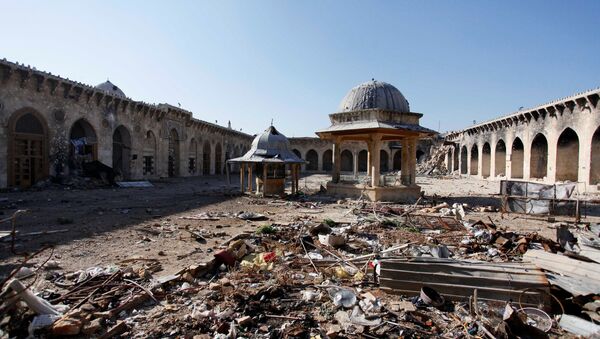 © REUTERS / Molhem Barakat
Subscribe
The Umayyad Mosque in Aleppo and the Khalid ibn Walid Mosque in Homs will be restored by the Chechen Republic’s Akhmad Kadyrov Fund. The mosques are set to reopen in August 2018.

“Earlier this year, during a visit of a Syrian delegation of top officials to the Chechen Republic an agreement was reached during the meeting with the head of the republic, Ramzan Kadyrov, on rendering assistance in the restoration of two mosques,” Daudov said.

He further said that one of the mosques, the Umayyad mosque, is situated in the city of Aleppo. It is the oldest mosque and was built in 715 A.D. 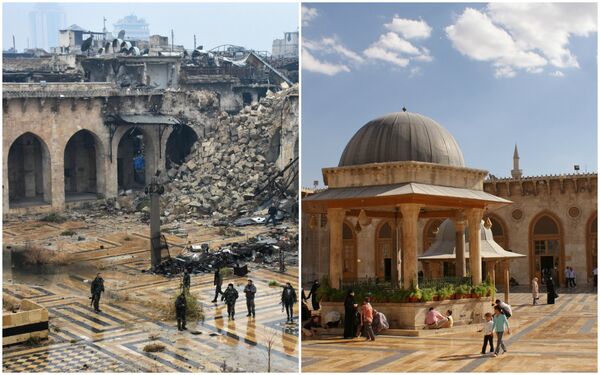 RIGHT (before): Visitors walk inside Aleppo's Umayyad mosque, October 2010. LEFT (after): The Syrian government forces' soldiers walk in the ancient Umayyad mosque in the old city of Aleppo, December 2016, after they captured the area.
© Photo : AFP, George OURFALIAN/ REUTERS/Khalil Ashawi

“The second mosque in Homs is named after Khalid ibn Walid. The agreement was reached, the deal was signed and the work has started,” the representative said.

He further said that the Umayyad Mosque in Aleppo was reconstructed from 1999 to 2005. This time the fund and the representative asked the Syrian side to speed up the process so the restoration work should be completed within one year. 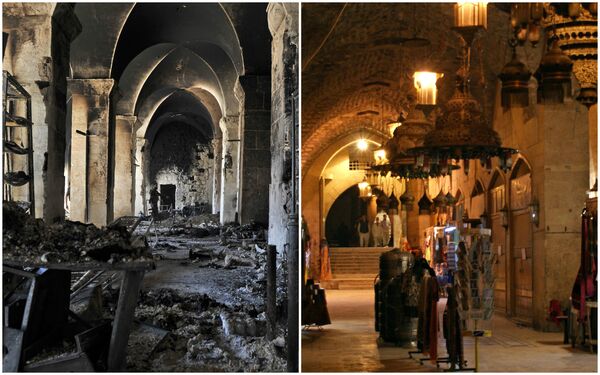 RIGHT (before): People walk inside the Khan al-Shounah market in the Old City of Aleppo, December 2009. LEFT (after): A Syrian rebel (rear) walks inside a burnt section of the Umayyad Mosque in the old city of Aleppo hours before the Syrian army retook control of the complex, October 2012.
© Photo : AFP, Tauseef Mustafa/ Reuters, Khalil Ashawi

The representative of the fund also spoke about the arrangements made between Chechnya and Syria for the construction of two shelters for Syrian children.

“The president of the Akhmat-Hadji Kadyrov Regional Public Foundation, pays much attention to orphans both inside Russia and in foreign countries such as the Syrian Arab Republic, Somalia and other countries where they need help and care,” Daudov said.

Russia Brings Over Five Tonnes of Relief Aid to Syria in Past 24 Hours
Currently talks are ongoing for the construction of homes for orphans in Syria. Although the exact location for these shelters has not yet been decided, the plan is to start building in Aleppo and Homs.

In addition to restoration and construction agreements, the Kadyrov Fund in coordination with the Syrian ministry has donated humanitarian aid for 10,000 Syrian families with orphaned children. The food baskets are planned to be distributed equally across all the provinces of Syria.

An earlier representative of the Syrian Ministry of Education, Ahmad Samir Al-Kabbani, expressed gratitude to Ramzan Kadyrov and his fund for contributing to Syria.

“I want to separately express my gratitude for their initiative [the head of Chechnya, Ramzan Kadyrov and the Kadyrov Fund] to restore the Umayyad Mosque in Aleppo and the Khalid ibn Walid Mosque in Homs. Also want to thank him for providing food baskets to the families of the deceased,” Al-Kabbani said.

000000
Popular comments
Good to hear. One out of many beautiful historial (and religious) monuments in Syria!