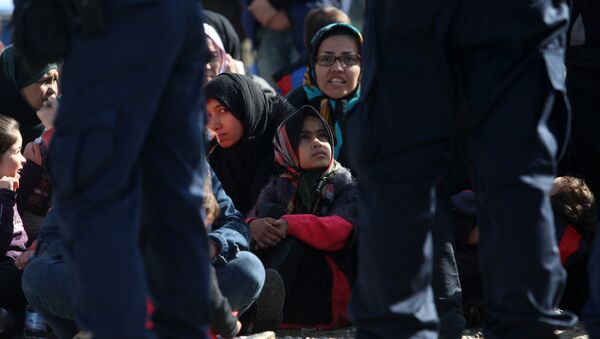 © AFP 2023 / SAKIS MITROLIDIS
Subscribe
International
India
Africa
Hungarian Foreign and Trade Minister Peter Szijjarto has accused the European Union of hypocrisy in dealing with migrant issue, as over 1,5 million migrants have crossed into Europe without any control or checking.

'Step Away' From EU Values: US Warns Hungary Against Adopting NGO Law
MINSK (Sputnik) — In September, 2015, the heads of the EU Interior Ministries adopted the European Commission’s proposal on the distribution of 160,000 undocumented migrants, staying on the territory of Italy and Greece, among the EU countries, under the quota plan. The Czech Republic, Hungary and Poland opposed the proposal. On June 14, the European Commission announced the launch of infringement procedures against the three aforementioned states.

"The European Union treats the migrant issue with hypocrisy… [the EU allowed] 1.5 million undocumented migrants to cross into the European territory without any control or regulation… Nobody checked anybody. We do not know, who these people are, why they have come and what their plans are. Obviously, this is a big risk," Szijjarto told Belarus 1 channel in an interview broadcast on Sunday.

According to the minister, Brussels threatens Hungary, the Czech Republic and Poland with sanctions instead of solving the issue and providing Europe with security.

Earlier in June, Hungarian Government Spokesman Zoltan Kovacs told Sputnik that Budapest was ready to defend its arguments against taking in asylum seekers under an EU quota system in the European Union's top court.