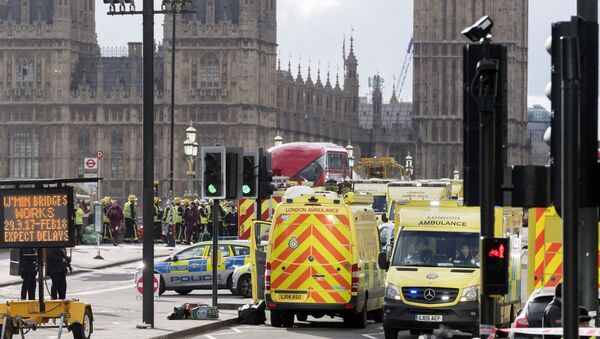 © Sputnik / Alex McNaughton
Subscribe
Over 40 foreign terrorists have managed to remain in the United Kingdom due to the existing human rights laws in the country, media reported citing an unpublished Home Office report.

The report mentions some details of a doctrine called Deportation with Assurances (DWA), the media outlet said. This doctrine, accepted by the UK government, allows to expel terror suspects under the condition that they will not be mistreated or tortured in their countries of origin, the publication said.

"My research suggests there are more than 40 foreign terrorists convicted in the UK who have avoided deportation using the human rights act. The figure is much larger than was previously thought," Professor Clive Walker, an international law expert and co-author of the report, said as quoted by the media outlet.

Terror Arrests in UK Soar to Record High Due to Security Threat
UK courts have successfully prevented the expulsion of foreigners suspected of terror activities using this doctrine based on human rights, and thus allowing them to stay in the country, the publication added.

Last Sunday, a van rammed into pedestrians near the mosque at Finsbury Park in North London. Police reported that at least one person was killed and 10 more were injured. This attack was the latest in the line of deadly terror incidents which have shaken the United Kingdom over recent months. Previous attacks included two vehicle-and-knife rampages on London Bridge and Westminster Bridge in the capital and a bombing in Manchester.