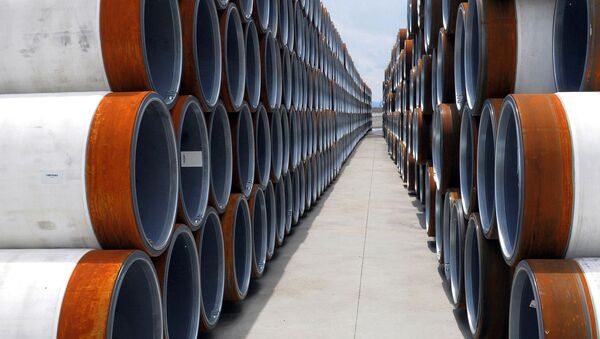 US Seeks to Prevent Turkish Stream Amid Competition for American Shale Gas
Director General of the National Energy Security Fund Konstantin Simonov said in an interview with Radio Sputnik that the actual implementation of the project has been launched.

According to the expert, Turkey and Russia have found a "common denominator" in their relations.

"The Turkish Stream is a project that is being implemented, and I think it is very likely to be completed. This is not just the beginning of some preliminary work: it is already one of the stages of the actual implementation of the project. There are no disagreements between Russia and Turkey right now. We all remember a rather difficult period in our relations, but now we have found a common denominator," Simonov said.

According to the expert, Ankara is very much interested in the realization of the project. So far, Turkey has been receiving Russian gas via the Blue Stream gas pipeline and through Ukraine.

"Turkey needs the first line of this pipeline. And in this regard, we have no difficulties — we don't need to write to Brussels, coordinate the issue with Poland or with someone else," Simonov stated.

Turkish Stream to Help Russia 'Mitigate Transit Risks' to Gas Exports to Europe
In Simonov's opinion, difficulties could emerge in connection with the second line of the gas pipeline.

"Because the second line is a transit line that will go further to the European Union. But here much depends on Brussels: whether it agrees that the transit will go through Turkey or it offers some other alternatives. But these alternatives should be serious. Because we don't want to repeat the story with the South Stream, which was blocked by a number of European countries because of rather far-fetched motives," the expert said.

On Friday, Russian President Vladimir Putin was observing the alignment of the shallow and deep-water parts of the Turkish Stream aboard the Pioneering Spirit pipe-laying ship in the southern Russian city of Anapa in the Krasnodar Territory. In his phone conversation with Turkish President Recep Tayyip Erdogan he said the project is likely to be successful thanks to an excellent level of coordination between the countries.

"Our projects with Turkey are developing the way they are not developing with many other partners," Putin told Erdogan. "Where we spend years with different countries on various administrative approvals, with Turkey this is done in several months and undoubtedly happens as a result of your direct personal support."

Putin, Erdogan Discuss Efforts to Fully Restore Russia-Turkey Economic Ties
The Turkish Stream project was announced in late 2014 by Russian President Vladimir Putin during his visit to Turkey. In November 2015, the project was suspended after a Russian Su-24 aircraft was downed by a Turkish F-16 fighter in Syria. A thaw in relations between Moscow and Ankara began last June following Turkey's apology to Russia.