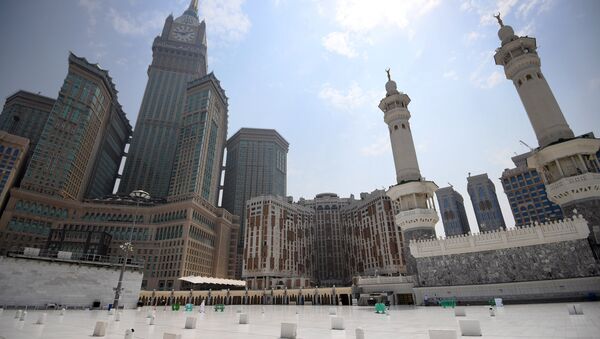 © Sputnik / Mikhail Voskresenskiy
/
Go to the mediabank
Subscribe
International
India
Africa
On Friday, the Saudi Interior Ministry said it had foiled an attack on the Grand Mosque in Mecca. Terrorists were allegedly going to attack worshipers who gathered at Islam's holiest site to celebrate the end of Ramadan.

The investigators believe the attack was plotted from abroad. Five suspects have been detained, including a woman.

Experts claim that the security situation in Saudi Arabia has worsened for several reasons. The main factors include the strengthening of the Daesh terrorist group in the Middle East and the war in Yemen against Shiite militants, which Riyadh has been waging since 2015.

Iran Condemns Foiled Terrorist Attack on Grand Mosque in Mecca
Moreover, Saudi Arabia has been financing a large number of projects promoting Salafism — the most fundamentalist branch of Islam. According to WikiLeaks, the country has financed radical terrorist structures through governmental and non-state structures, including Al-Qaeda and Daesh.

Riyadh has not commented on such allegations and claims that the blame for terrorist activities lies on Qatar.

Editor-in-chief of the Problems of National Strategy journal and orientalist Azhdar Kurtov believes that the growing terrorist threat in Saudi Arabia is related to the country's aggressive and ill-conceived foreign policy.

"We can't exclude the possibility that the attack was indeed prepared by some external forces which the Kingdom is involved in a conflict with. However, recent events have indicated that Riyadh, with its support of radical groups, has created a favorable environment for terrorists within the country," Kurtov told RT.

According to the analyst, terrorist organizations, de facto created by Saudi authorities, have "turned their punishing sword against the sponsor."

"As far as I can tell, Saudi intelligence is fulfilling the will of the ruling elite, by dispelling the seeds of jihadism around the world. But in this process, Riyadh apparently did not properly assess threats to its own security. Now, even the Sunni holy sites are seriously threatened, which was not the case before," Kurtov concluded.

Bus Accident in Saudi Arabia Leaves 2 Pilgrims Dead, Over 30 Injured
The number of terrorist attacks in Saudi Arabia has increased over the last few years. On November 3, 2014, three Daesh terrorists killed eight residents of a Shiite village in the east of the country and wounded dozens of others.

On May 29, 2015, a suicide bomber blew himself up in the Shiite mosque of Imam Hussein in the city of Dammam on the Persian Gulf coast. The explosion clamed the lives of four people; four others were injured.

On July 4, 2016, several explosions took place in the cities of Medina, Al-Qatif and Jeddah.