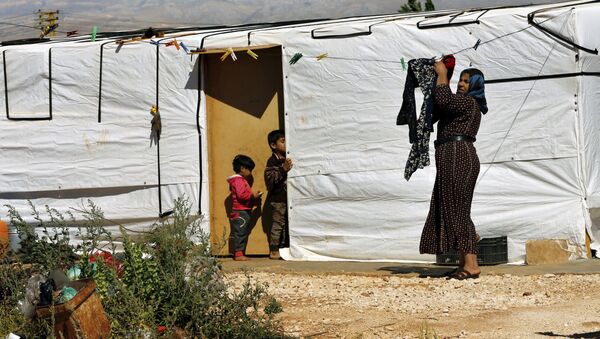 Leader of the Lebanese Progressive Socialist Party Walid Jumblatt said that Beirut appreciated Russia's efforts to support Lebanon's stability and the unity of the country, as well as Moscow's efforts aimed at a political settlement in Syria.

Hezbollah Dismantles Military Positions on Lebanese-Syrian Border as Area Safe
MOSCOW (Sputnik) — The creation of the de-escalation zones in Syria might partly solve the problem of the Syrian refugees in Lebanon, leader of the Lebanese Progressive Socialist Party Walid Jumblatt said.

"Regarding our position on [establishment of] the zones of de-escalation in Syria, which Russia is currently conducting, it is possible that the success of this project will allow the return of some of the Syrian refugees and temporarily displaced persons who currently live in our country, Jordan and Turkey. So, the problem of the Syrian refugees could be partially solved," Jumblatt said at a meeting with Russian Foreign Minister Sergey Lavrov.

Jumblatt added that Beirut appreciated Russia's efforts to support Lebanon's stability and the unity of the country, as well as Moscow's efforts aimed at a political settlement in Syria.

"But Russia's efforts will not succeed without the support of the international forces. It is possible that some foreign countries do not want to support the policy and efforts to achieve a political settlement in Syria and in the region. In such case, the crisis will continue and drag on," the Lebanese politician said.

Syrian Army Takes Control Over 70-Mile Border Section With Lebanon
At the latest Astana talks on Syria, which took place on May 3-4, Russia, and Iran alongside Turkey — the guarantor states of the Syrian ceasefire regime — signed a memorandum on the establishment of four de-escalation zones in Syria. The four zones span the northwestern Idlib province and parts of the neighboring Latakia, Hama and Aleppo, the north of the central Homs province, Eastern Ghouta near Damascus, as well as southern Daraa and Quneitra regions. The monitoring and management of the safe zones is carried out by military personnel from the ceasefire guarantor states.

The eruption of the civil war in Syria in 2011 forced many of its citizens to search for shelter in the neighboring states, including Lebanon, which put additional pressure on the economies of the recipient countries.