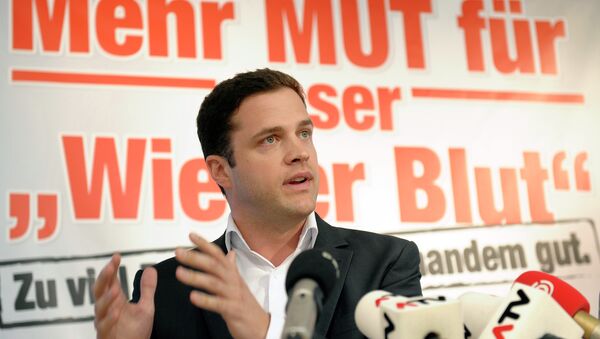 © AP Photo / Hans Punz
Subscribe
The United States seeks to divide traditional Europe, which Russia is part of, by forcing EU member states to impose restrictive measures on Moscow, member of the Freedom Party of Austria (FPO) Johann Gudenus said Thursday, adding that the European Union's compliance with US demands highlights the bloc's weakness and dependence on Washington.

US Anti-Russia Sanctions Bill Would Pass House if Vote Held Now - Official
MOSCOW (Sputnik) — EU sanctions targeting specific sectors of the Russian economy were imposed in July 2014 and are due to expire at the end of this July. On Wednesday, a source in the German government told reporters that the anti-Russian sanctions could be extended for another six months following the EU leaders' summit, which kicked off earlier in the day.

"We are forced by the United States to extend sanctions against Russia and that shows that the European Union is very weak and it does not have independent policies. Russia is a part of Europe but there are some transatlantic forces, which are trying to divide traditional Europe, which obviously includes Russia," Johann Gudenus, who is also a deputy mayor of Vienna, told reporters during Moscow conference "Russia and Europe: cooperation instead of confrontation" held at the Rossiya Segodnya international multimedia press center.

The FPO lawmaker underlined that the sanctions were part of Washington's European policy, aiming at stirring up tension in the region, and called on European states to oppose the United States' destructive agenda in order to overcome division and build good-neighboring relations throughout the continent.

Moscow's relations with the West deteriorated rapidly following Crimea’s 2014 referendum on reunifying with Russia and the escalation of the Ukrainian crisis. The United States, the European Union and their allies accused Moscow of violating Ukraine's territorial integrity and interfering in the country’s internal affairs. Russia has consistently denied the allegations, pointing out that the policy of sanctions is counterproductive.