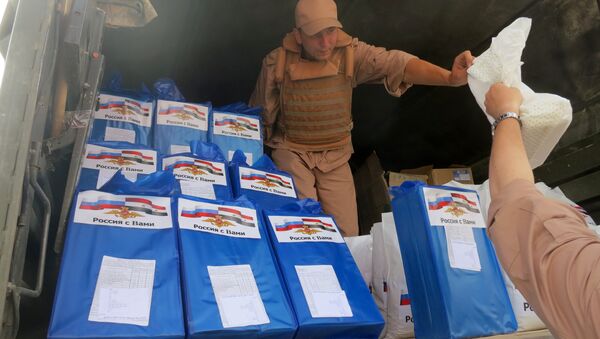 The Russian co-chairs in the International Syria Support Group's (ISSG) task forces on humanitarian access and ceasefire in Syria have participated in a humanitarian mission in Homs, assessing the needs of the civilians living there for improving the work within the platform, Russian diplomatic source told Sputnik Thursday.

Inter-Agency Humanitarian Convoy Delivers Aid to Syria’s Harasta - UN
GENEVA (Sputnik) — Russia's co-chairs in the ISSG's task forces on humanitarian access and ceasefire in Syria took part in a humanitarian aid delivery to Syria's Homs, according to the source.

"The co-chairs from Russia in the International Syria Support Group, the representatives of the Foreign Ministry — the head of the political referendary of the Permanent Mission of the Russian Federation at the UN Geneva Office Maria Khodynskaya-Golenishcheva, and the Russian Defense Ministry — Col. Alexander Zorin, took part in such actions for the first time. This made it possible to assess the real needs of the population in a number of districts for more effective work within the ISSG framework. Contrary to what the Western press reported, humanitarian needs are also high in areas controlled by the Syrian government. This practice will be continued on a regular basis," the source said.

UN Asking ISSG to Facilitate Access to Civilians, 72-Hour Truce In Syria - Envoy
The ISSG task forces' co-chairs also held a meeting in Damascus with Syrian First Deputy Foreign Minister Faisal Mekdad, discussing the cooperation between Damascus and the UN humanitarian agencies, the course of the inter-Syrian negotiations and the participation of Syrian government delegation in the negotiations in Geneva and Astana.

Representatives of the coordination center to reconcile the warring parties in Hmeimim also took part in the discussion. They also held a separate meeting with representatives of the United Nations and the International Committee of the Red Cross, with whom they discussed the continuation of active cooperation to help the people of Syria.