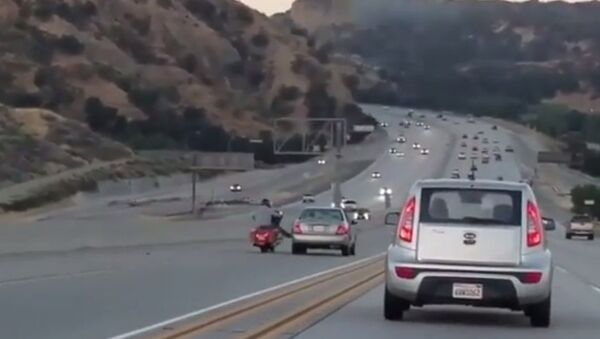 © Youtube/The Gambler
Subscribe
A road rage incident caught on camera between a motorist and a motorcyclist ended in a fiery chain-reaction crash that resulted in multiple injuries.

The motorcyclist kicked the driver’s side of a sedan travelling in the carpool lane on the southbound 14 Freeway in Santa Clarita near Newhall, north of Los Angeles, early Wednesday morning. "Words went back and forth," according to Tim Morrison, who shot the video, telling an NBC affiliate that he began filming after he saw a grey sedan inadvertently cut off the motorcyclist.

​​After the kick, the vehicle pushed the motorcycle to the center divide by veering left, causing the driver to swerve and crash into the wall, striking a nearby Chevrolet pickup truck in the process and causing the truck to flip over.

Unharmed, the motorcyclist rode right past the scene.

The California Highway Patrol reported that the man driving the truck was hospitalized with non life-threatening injuries and is expected to make a full recovery.

"Obviously it was a road rage incident," CHP officer Josh Greengard said. “He was kicking the vehicle.

"We need to get the motorcyclist’s side of the story to see what led up to this incident. We’re not sure what happened farther back."

Morrison immediately turned his footage of the encounter over to the CHP, saying, "The old man who had nothing to do with it was the one that got hurt … Hopefully by doing this, it can help him out."

The CHP is treating the crash as a hit-and-run incident.