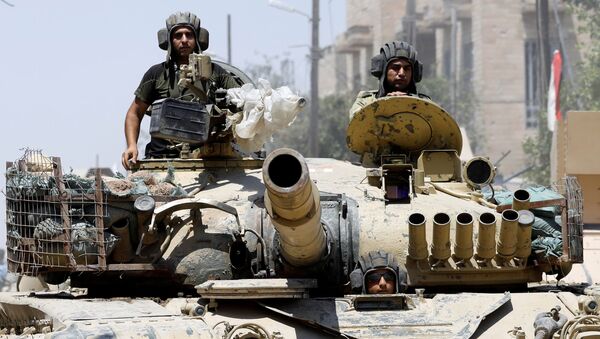 © REUTERS / Erik De Castro
Subscribe
European Union Foreign Policy chief Federica Mogherini has suggested the bloc may dispatch a security mission to help stabilize Iraq after the expected recapture of Mosul from Daesh. While plans remain at an embryonic stage, the mere prospect has already been subject to much criticism and doubt.

EU foreign ministers held an initial discussion June 19 in Luxembourg, considering the deployment of a multi-country military contingent that could train Iraq security officials, in response to a formal request from the government of Iraq.

It is suggested the mission could build up Iraqi counterterrorism forces, establish functioning justice and interior ministries and give strategic security advice to the Iraqi government, as well as train police.

While a seemingly meager step, such an effort has seismic implications. For one, it would by definition signal an end to France and Germany's famed aversion to European involvement in Middle East wars — before and after US invasion of Iraq in 2003, then-German and French leaders Gerhard Schroeder and Jacques Chirac became totems of the anti-war movement. Both countries have since become separately involved in the US-led fight against Daesh militants in Syria and Iraq, although Germany's role has been negligible, and France's limited to airstrikes.

"EU men and women in uniform are already serving to fight against terrorism in many parts of the world" @FedericaMog #Bamako pic.twitter.com/js7NIzBjwJ

Moreover, it would arguably mark the first major test of autonomous EU foreign policy in history. Previous EU missions of this ilk — including a 2006 visit to Iraq to train judges and police, widely regarded as a failure — have been extremely limited and primarily non-military.

Unexpected Turn: Why EU Army Could Actually Play Into the Hands of Russia

Never before will have a combined EU military force been deployed anywhere in the world. The proposals are nonetheless somewhat unsurprising given Mogherini's oft-stated desire for a beefed up military role for the bloc abroad, and her hot pursuit of a common EU defense policy and corresponding alliance.

Daesh verges on defeat in its Mosul stronghold, and faces a concerted assault on its de facto capital in Raqqa, Syria. European and US officials are concerned tribal groups may fight for control once the militants flee, sparking new waves of violence.

"We cannot afford to allow a vacuum to develop. We and others are ready to step in. Just how we do that is to be decided," an anonymous EU diplomat said.

The EU's External Action Service is expected to present proposals soon — although many are already skeptical about the viability of the plans. Among them is Middle East analyst Martin Jay.

"The last time the EU sent a peacekeeping mission to a wartorn area was in 2002, when French troops wearing EU armbands went to see off rebel militias battling near the border between Chad and Egypt. They were sent under a limited mandate which prohibited direct engagement — when the troops reached a frontline position and were met with live rounds, they simply ran away. It's difficult to see how the EU would be able to grant this mission an appropriate mandate, given it's probably the most incendiary area of the Middle East," Mr. Jay told Sputnik.

He characterizes the EU's push as an attempt to proverbially "puff out its chest" in the wake of Brexit. With Europe's premier military power currently negotiating its exit from the bloc, the EU is in search of a "public relations ploy" to generate positive press coverage, and demonstrate its continued military relevance. Brussels' resultant "desperation" to put boots on the ground in some form has led Mogherini et al to scour the Earth's surface for an opportunity to do so.

"The stock response of Brussels leaders to a crisis in Europe is that Europe needs more EU — and Commission President Jean-Claude Juncker recently said the world needs more EU. This would be the first step in that project. Moreover, Mogherini has been less than successful in her post. There was a lot of hope placed in her upon her appointment, but even the most sycophantic journalists have struggled to write a single positive thing about her since she got the post. She threatened Israel sanctions and they laughed at her, threatening to end relations with the EU. She hasn't been invited to any Syria peace talks. She's desperately struggling to look tough," Mr. Jay adds.

He imagines that if the mission does come to pass, it will be a highly low-key affair, purely focused on peacekeeping — and it won't come to pass at all unless Mosul is completely liberated first, as placing EU soldiers in the area while fighting continues may be "the biggest disaster in the history of the EU."

In short, Mosul is not a region to road-test the EU's desired common army for the first time.

000000
Popular comments
Nato wll put a stop to that pretty fast. Only Nato has right to kill innocent civilians, bomb hospitals and schools and loot the assets.
professor.hornblow
21 June 2017, 18:39 GMT1
000000
I despise Daesh and their cowardly tactics. That being said, pragmatism tells me that a group of 100 Daesh fighters with the level of experience they have acquired would blast away any EU unit five times their size on the ground with halal-approved bows and arrows, baseball bats and knives unless that EU unit was either British, French or Polish, even if those EU units had air support (which Germany does not at the moment, I understand). If the EU "army" tries to set up a base in Daesh territory that base will meet its end in a manner similar to General "Chinese" Gordon's forces at Khartoum as follows: www.youtube.com/watch?v=rlvJznNXdto