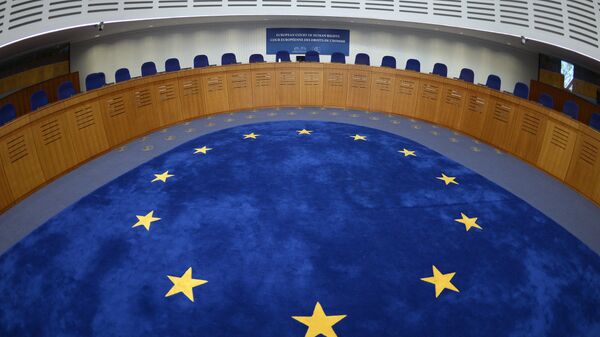 © AFP 2021 / PATRICK HERTZOG
Subscribe
There are certain complaints against the European Court of Human Rights' (ECHR) decisions, but it is too early to estimate the prospects of alternative to the organization proposed within the framework of the BRICS organization, a member of the Council for Civil Society and Human Rights told Sputnik on Wednesday.

No Persecution in Russia on Any Grounds - Lavrov on ECHR's LGBT Ruling
MOSCOW (Sputnik) – On Tuesday, Yelena Sutormina, the chair of the Russian Civic Chamber's Committee on Public Diplomacy and Support for Compatriots Abroad, told Sputnik that the Civic Chamber had plans to send a proposal to the Russian Foreign Ministry to create an alternative to the ECHR within the framework of BRICS.

"It is too early to estimate this initiative — there are more questions than answers. It is necessary to give assessment to the ECHR decisions and if you do not agree with them — to release your arguments," Alexander Brod said, adding that ideas of creation of yet another human rights courts had been repeatedly voiced during the recent decade, but such initiatives had not gone any further.

The official added that despite several claims against the ECHR, a new institution would have its own minuses.

"Of course there are complaints against the ECHR. We, as human rights activists, monitoring its activities and the decisions, have repeatedly faced a political bias of this body… BRICS comprises five countries [Brazil, Russia, India, China and South Africa] and the ECHR is the basis for protection of human rights in 47 members of the Council of Europe… That's why even if the idea of such a court would be discussed at the BRICS summit only a limited number of people would be able to petition this institution," the official added.

There are also questions to the professionalism and impartiality of the institution within BRICS, as there are fears that the BRICS member states could have an impact on decisions of the institution, Brod outlined.