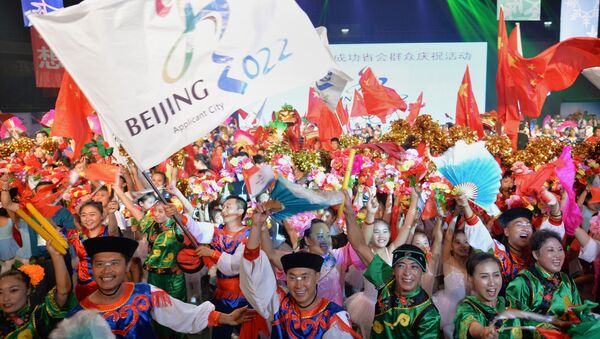 © AFP 2021
Subscribe
A video of a lecturer haranguing elementary school children into being thankful to their parents until they wept went viral recently. This type of education is still popular among many in China, as it is in line with traditional values of filial piety, to the point that top speakers can make a small fortune.

Why US Wants China to Share Its Burden of Fighting Daesh
Hundreds of elementary school children sit on the ground of a school campus, under the blazing midday sun. A man is on stage, shouting hysterically into a microphone.

"If your mother's feelings are not expressed out loud, they will become mental… they can only express their pain onto someone who they love the most: their children," the man shouted at the top of his lungs, his voice cracking, explaining why it is necessary they be treated like a doormat by their parents.

The video camera sweeps through rows of children crying in unison, some burying their heads in their sleeves, some pounding the ground. A high-pitched whine fills the air.

The video went viral a few weeks ago. It was shot at Shuozhou Experimental Elementary School in North China's Shanxi Province. The hysterical man with the microphone is Ouyang Weijian, a self-claimed educator who founded the Guangzhou-based Upside Down Education company and teaches "gratitude classes" all around the country with his team. He's one of many such educators who focus on the filial aspect of the traditional parent-children relationship in China, and apparently such classes still have a vast market.

To Ouyang, who goes by the name "Papa Ou," making children cry at the Shanxi elementary school was just another regular day, he had no idea it would be so controversial.

Ouyang tried to explain his side of the story on his Weibo on May 27, writing that he was invited to speak by the school and he did so for free, with no on-campus sales. He also called his teaching "gratitude education with positive vibes… with the goal of improving parent-children and teacher-student relationships." He thinks there are many parents in China who "do not know how to love, and it's bringing pain to their children."

The Global Times was unable to reach Ouyang for an interview as of press time. But a Beijing News article published on May 28, a few days after the video went viral, described Ouyang's day-to-day business at a class in Beijing's suburban Changping district. This time he chose to make the parents cry rather than their kids.

China Becomes 2nd Biggest Importer of Russian Food Products
According to the report, the parents began the session by holding hands and singing about the love of a parent in unison, "When I fall, you always help me up. When I cry, you always make me happy." Every now and then, someone would bow their head and cry silently. Then Ouyang went on stage and started speaking passionately, while parents feverishly took notes.

Finally, after hours of lecturing, Ouyang showed a few videos of children crying and reciting what personal changes they made after receiving "gratitude education." Many of the parents, touched by the videos, also started crying.

Ouyang is not the only one earning his living by promoting traditional notions of filial piety. A simple Baidu search turns up many more examples. Just last week, Li Chunjing, an "education expert," was invited by a vocational school in East China's Shandong Province to hold "gratitude lessons," according to a local newspaper.

He asked the students to stand face-to-face with their parents, hug them, caress their foreheads, look at their graying hair and wrinkles, then tell them how thankful they are. The students ended up in tears.

Even in their adult years, people who have received such lessons cannot forget them. A netizen surnamed Qin told the Global Times she remembers being forced to attend a "gratitude class" held by her elementary school teachers. After hours of lectures on why one should repay their parents, the teacher left a homework assignment that the students should go home, wash their parents' feet and write an 800-word essay about how they felt washing the feet due the next day.

Qin said she deliberately failed that assignment because she didn't feel comfortable with it, and neither did her parents.

The message of these lessons has also seeped into other aspects of Chinese society because they are sugarcoated in Chinese traditional values which still have wide appeal. There are a few public-interest advertisements that run regularly on China Central Television, one of which shows a little boy washing his mother's feet, and another shows a father with Alzheimer's hiding a bowl of dumplings away for his son, because he thought he hadn't eaten dinner yet.

Such lectures have become a profitable business in China. The Beijing Times reporter contacted Ouyang's group, posing as a parent, and a staff member said Ouyang can earn up to 100,000 yuan ($14,714) in one day.

A woman surnamed Yan told The Beijing News she first heard Ouyang speak in 2011 when she was going through a rough patch with her daughter. Then she convinced her husband to take her and their two children to hear him.

‘Stay Virgin’ Speech Sparks Debate on ‘Traditional Feminine Values’
She claims after his lessons, she and her daughter no longer fight and that her daughter learned to respect and admire her parents. Over the last few years, Yan has spent more than 200,000 yuan on such lectures. The most expensive one was a week-long class costing 49,800 yuan for her daughter, The Beijing News reported

Controversy has always accompanied these events. Netizens bombarded the Shanxi school video, calling it cheap, phony and another example of money-making based on outdated values.

The Beijing News wrote that Ouyang's teachings have caused at least one man to split up with his wife. A farmer from East China's Zhejiang Province found out his wife attended four of Ouyang's camps, costing 200,000 yuan in total. He already had housing loans and other debts and tried to talk his wife out of spending their savings on these lessons. After throwing out her copies of Ouyang's books twice but still finding her determined to give Ouyang money, the farmer and his wife separated.

Wang Yuebing, a commentator on Tencent News, wrote that in Chinese tradition, being filial to one's parents would mean unconditional obedience so parents raise their children in order to get something in return, and in this day and age this value should not be promoted again.

"I personally don't like this kind of lecture, I think these children are being coerced into thanking their parents, it's just a show," Fang Gang, a professor of sexology at Beijing Forestry University, told the Global Times. He has held many classes and lectures on sex education and parent-children relations.

'Step Away' From EU Values: US Warns Hungary Against Adopting NGO Law
But it is undeniable this aspect still exists in Chinese society today. The difficulties facing Chinese parents, many of whom lack knowledge on how to have a healthy relationship with their children, have become a hot topic in Chinese society.

In recent years, it's become more and more common to see Chinese parents try to run their children's lives. In parks and public squares, it's easy to see parents holding signs covered with their children's information looking for dates.

In popular TV series Ode to Joy, about five young women living in Shanghai, most of the parents portrayed are not "normal." They either leech off their children's money, asking them to "pay" for years of parenting, or try to run their lives in in the name of love, asking their children to understand and appreciate their efforts.

"This is control, not proper education… it's domestic violence against one's kids," Fang said. "Gratitude should come naturally, if parents and children love each other."

000000
Popular comments
go anywhere in the world and one will find similar strange happenings. We are an incomplete race in many ways.
michael
21 June 2017, 23:55 GMT
000000
Newsfeed
0
New firstOld first
loader
LIVE
Заголовок открываемого материала
Access to the chat has been blocked for violating the rules . You will be able to participate again through:∞. If you do not agree with the blocking, please use the feedback form
The discussion is closed. You can participate in the discussion within 24 hours after the publication of the article.
To participate in the discussion
log in or register
loader
Chats
Заголовок открываемого материала
Worldwide
InternationalEnglishEnglishMundoEspañolSpanish
Europe
DeutschlandDeutschGermanFranceFrançaisFrenchΕλλάδαΕλληνικάGreekItaliaItalianoItalianČeská republikaČeštinaCzechPolskaPolskiPolishСрбиjаСрпскиSerbianLatvijaLatviešuLatvianLietuvaLietuviųLithuanianMoldovaMoldoveneascăMoldavianБеларусьБеларускiBelarusian
Transcaucasia
ԱրմենիաՀայերենArmenianАҧсныАҧсышәалаAbkhazХуссар ИрыстонИронауОssetianსაქართველოქართულიGeorgianAzərbaycanАzərbaycancaAzerbaijani
Middle East
Sputnik عربيArabicArabicTürkiyeTürkçeTurkishSputnik ایرانPersianPersianSputnik افغانستانDariDari
Central Asia
ҚазақстанҚазақ тіліKazakhКыргызстанКыргызчаKyrgyzOʻzbekistonЎзбекчаUzbekТоҷикистонТоҷикӣTajik
East & Southeast Asia
Việt NamTiếng ViệtVietnamese日本日本語Japanese俄罗斯卫星通讯社中文（简体）Chinese (simplified)俄罗斯卫星通讯社中文（繁体）Chinese (traditional)
South America
BrasilPortuguêsPortuguese
NewsfeedBreaking
04:43 GMTUS Marine Colonel Put in Brig For ‘Asking for Accountability’ Over US Departure From Afghanistan
04:03 GMTWitness Who Claims She Saw Prince Andrew Dancing With Giuffre at Club to Testify in Court - Report
03:24 GMTBennett Claims He Said 'No Three Times’ to President Biden During Their August Meeting
03:16 GMTRepublicans Slam DHS Chief Mayorkas for Allowing Thousands of Haitians Into US
01:37 GMTUS ‘Humiliated Like Never Before’, Trump Says, After DHS Allowed Thousands of Migrants to Pour in
01:31 GMTLockheed Martin to Build US Army’s Next Generation Tactical Vehicle Based System
01:10 GMTBorder Patrol Agents Disgruntled Over Biden's Attempts to Throw Them 'Under the Bus' - Report
00:53 GMTBeard-Check: Afghan Barbers Banned From Shaving, Trimming Beards - Reports
00:27 GMTR. Kelly Found Guilty: Will Artist Be Removed From Music Services?
00:03 GMTIs Sir Alex Ferguson Right, That Ronaldo, and not Messi, Could Score a Hat-trick for Anyone?
00:00 GMTUS Senator Menendez Urges New Sanctions on Turkey if It Acquires More Russian Weapons
YesterdayInsurgents Who Detained President of Guinea Declare Transitional Charter - Reports
YesterdayTexas Lawmakers Propose New Congressional Districts in Cities of Austin, Houston
YesterdayIOM Looking for Alternatives for Haitians at US Border, Brazil Being 1 Option - Sources
YesterdayCzech Republic Will Purchase Israeli-Made Air Defenses to Replace Soviet Gear
YesterdaySPD Leader Scholz Says Yet to Hear Congratulations From CDU/CSU Rival
YesterdayTaliban Say Norwegian NGO Promises to Ship Humanitarian Aid to Afghanistan This Winter
YesterdayUS Blue-Chip, Tech Stocks Fumble on Worries of Rate Hike
YesterdaySerbian Troops Monitoring Situation at de-Facto Serbia-Kosovo Border Amid Protests
YesterdayUnidentified Man Threatens Journalist, France's Potential Would-Be President Eric Zemmour - Reports