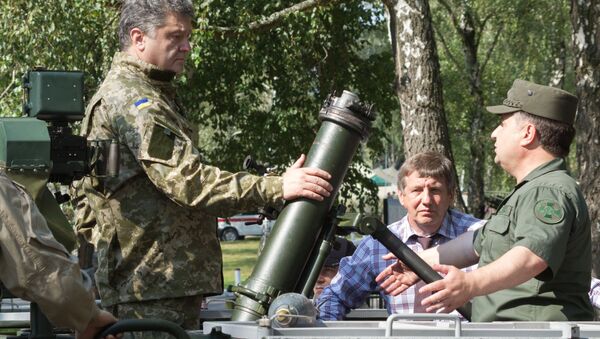 MOSCOW (Sputnik) — Commenting on Poroshenko's visit to Washington for talks with US President Donald Trump on Tuesday, Peskov noted that "this is a sovereign matter of the two countries."

"Of course, we would like to hope that these contacts at the highest level will be used by our US colleagues to send a powerful signal to Kiev in favor of the need for the implementation of Minsk agreements," he said.

The Bloodthirsty: Poroshenko Openly Calls for Continuing Donbass War
The Donbass conflict erupted in April 2014 as a local counter-reaction to the West-sponsored Maidan coup in Kiev that had toppled President Viktor Yanukovych in February. Residents of the Donetsk and Lugansk regions held independence referendums and proclaimed the People's Republics of Donetsk and Lugansk. Kiev has since been conducting a military operation, encountering stiff local resistance.

Peskov criticized Poroshenko's boast that his visit with Trump comes ahead of Russian President Vladimir Putin as inappropriate.

"We do not believe that it is appropriate to arrange some kind of races," Peskov told reporters.

He noted that "information on the real state of affairs with Ukrainian [conflict] settlement is well-known in Washington."

"If desired, Washington could easily get acquainted with all the nuances, obligations that lie with Kiev in accordance with the agreements signed in Minsk," Peskov said.

Earlier in the day, President Poroshenko said on his Twitter account that the fact that his meeting with Donald Trump was taking place before a bilateral meeting between Trump and Putin was "very important."

Poroshenko is currently paying a working visit to the United States and will hold a meeting with Trump, Vice President Mike Pence and Defense Secretary James Mattis.