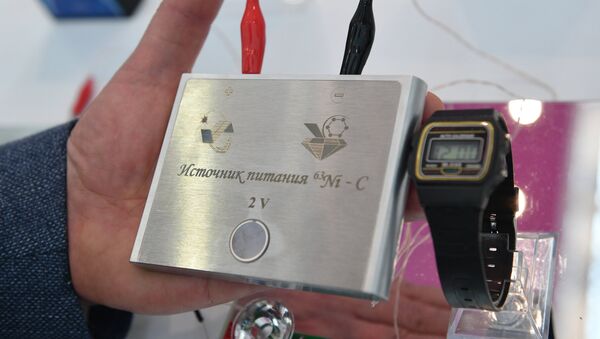 © Sputnik / Ramil Sitdikov
/
Go to the mediabank
Subscribe
International
India
Africa
Deputy head of the Russia's “Luch” laboratory Aleksander Pavkin said that a small-scale power source created in laboratory will be completely safe with respect to radiation, since the isotope does not emanate neutron or gamma radiation.

Russia
Rosatom Starts Nuclear Fuel Production for Western-Designed Nuclear Plants
MOSCOW (Sputnik) — Russia's “Luch" enterprise, which is part of the scientific division of Rosatom, has created a small-scale power source based on the radioactive nickel-63 (Ni-63) isotope, which could be sustained for up to 50 years with a relatively high output, project participants said during the international Atomexpo forum on Tuesday.

“We presented a model of such a power source at the forum. It is a result of completed scientific research conducted on our initiative. Its operational characteristics should be optimized in the future,” deputy head of the “Luch” laboratory Aleksander Pavkin told reporters.

The Ni-63 nickel isotope is suitable for miniature and safe power sources that do not require to be recharged for several decades, and could be used in extreme or difficult conditions in medicine, space or other fields.

“In this case the source’s power is about one microwatt, enough to sustain a cardiac pacemaker,” the scientist noted.

Russia
Rosatom Seeks to Generate $137 Bln in 10-Year Foreign Orders Portfolio
He added that the source will be completely safe with respect to radiation, since the isotope does not emanate neutron or gamma radiation.  Its “soft” beta radiation should meanwhile be totally absorbed by the transducer.

The power source was developed within a joint project of two scientific organizations located in the Moscow region: the Podolsk-based “Luch,” and Troitsk-based Technological Institute of Superhard and New Carbon Materials.