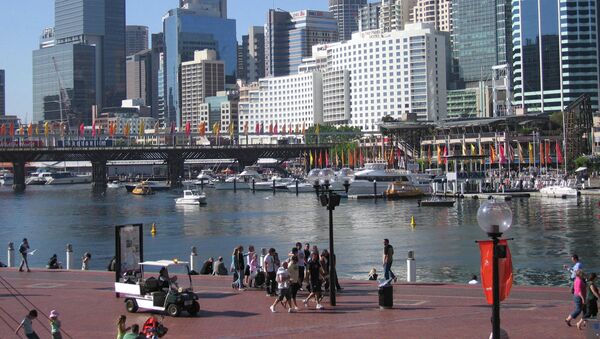 © Sputnik / Aleksandr Yurev
/
Go to the photo bank
Subscribe
Lower household incomes and higher indebtedness, along with a slower pace of economic expansion have put Australia's economy in a volatile situation, where the overpriced real estate sector might crash in a scenario similar to the 2007 mortgage collapse in the US.

Kristian Rouz — The Australian economy has gone without an economic recession since the first two quarters of 1991, and the extended period of economic growth that followed was mainly driven by a robust growth in mining output and strengthening economic ties with mainland China. However, Australia is now facing mounting structural issues as its successful model of economic growth might be wearing down.

US Recession Likely Within Trump Presidency, But Not Very Soon
The international rating agency Moody's downgraded the credit ratings of Australia's largest banks this week. It reasoned that Australian households have accumulated a significant debt burden in recent years, while the country's macroeconomic fundamentals have become increasingly unsustainable.

Australia's GDP has slowed down to 0.3 percent in the first quarter of this year after having expanded by 1.1 percent in 4Q16 and by 0.9 percent in 1Q16, according to data from Australian Bureau of Statistics (ABS). Australia's economy had a short period of contraction in the third quarter of the past year due to lower commodity prices and foreign trade woes, and while the country's overseas market is gradually improving, Australia's reliance on exports of industrial metals puts the nation in a vulnerable position.

"It is important that we have a sharp focus on the reforms that can make a real difference to our living standards," Reserve Bank of Australia (RBA) Governor Philip Lowe said on Monday. "If we don't do this, we will fall behind."

The past 26-year period of sustainable economic growth in Australia was largely a consequence of the nation's exposure to mainland China, where the population of 1.371 billion dwarfs Australia's modest 24 million. While the industrial boom in China had been driving commodity prices, Australia experienced a massive expansion in its mining sector. Mainland China is Australia's largest overseas market: approximately 34 percent of all Australian exports (A$90 bln, or £60 bln) were sent to China in 2014, according to government statistics.

Also, during the period of 2005-2015, Australia enjoyed a windfall of foreign direct investment (FDI) from China, totaling some £62 bln.

Another reason behind Australia's extended period of uninterrupted (by more than one quarter of contraction at a time) economic expansion is the weaker Australian dollar, which helped the nation's exports. In 1983, Australia de-pegged its currency from the British pound, allowing the RBA to float the Aussie dollar FX rate in order to extract maximum economic benefit from exchange rates, including higher investment at home.

China Requires Full Access to Canadian Economy in Free Trade Talks
Now, however, the world's export-reliant economies have been in tumult for roughly three years, and economically less-diversified commodity metal exporters (for example, in Africa) have been struggling ever since the collapse in global industrial metals in 2013 inspired an across-the-board decline in raw material prices. The economic slowdown and gradual reforms in mainland China have also started taking a toll on Australian growth.

This, in turn, passed on to the incomes of the Australian households, while the burden of household indebtedness has increased. Such dynamics might suggest that Australia is on the verge of a structural recession.

Australian labor productivity has slowed despite automation, while competition for jobs has increased as sustainable immigration in the past 30 years has contributed to an expansion of the labor supply. In 1980, Australia's population was 15 mln people, in 1990, it rose to 17 mln, and is currently about 24 mln. In May of this year, Australia's jobless rate was 5.5 percent and the country had a labor participation rate of 64.9 percent.

Such a situation has contributed to a stagnation in salaries and wages as Australian workers are now willing to settle for having a job rather than seeking higher-paying opportunities, RBA's Lowe observed.

"I don't think any of these things are going to change quickly. We'll have to get used to it unfortunately," Lowe said.

The RBA cut base borrowing costs to their historic low of 1.5 percent in August 2016 in an attempt to spur inflation, domestic consumption and investment. Australia's inflation rate stands currently at 2.1 percent. However, Australian consumers find themselves in an increasingly tough economic environment.

"The reduction in the savings rate, the rise in household leverage and the rising prevalence of interest-only and investment loans are all indicators of rising risks," Moody's observed in their bank ratings downgrade.

Trumponomics? Ford to Cut 10% of North American Workers
Australia's four largest (Big Four) commercial lenders include: National Australia Bank (NAB), Commonwealth Bank (CBA, which was owned by the government until 1996), Australia and New Zealand Banking Group (ANZ), and Westpac (WBS). Each of these banks is significantly exposed to mortgage debt, and amidst the rising challenges to earnings, the risks of a mortgage crash, similar to that in the US in 2007, are heightened.

The Australian housing market's total worth is A$6.6 trln, which is roughly 388 percent of the nation's GDP of A$1.7 trln. The total worth of Australian real estate has ballooned not least due to the influx of foreign money, including from mainland China. A crash of such strategically important market would likely mean hard times for the entire nation as Australia's government and RBA will struggle to cover a A$6-billion breach in the economy.

That all being said, Australia's economy might be on the verge of massive reforms if the government hopes to dodge a structural recession. Since 2008, Canberra has avoided any economic reforms as the major political parties have been concerned about gaining or maintaining electoral dominance. This time around, there might be no choice left: the recent changes in international trade have left export-reliant nations with very slim chances of maintaining their economic well-being without rebalancing their economies towards domestic demand-driven models of expansion.