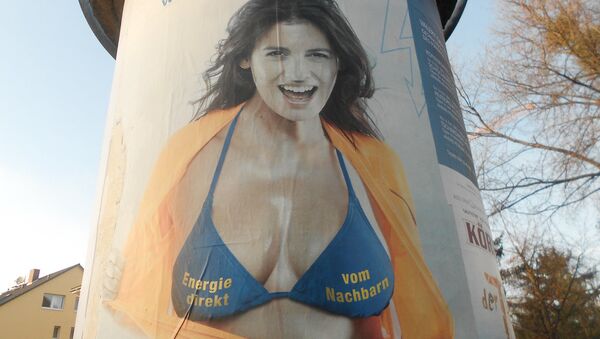 Politicians in Berlin have moved a step closer to a complete ban on "sexist advertising," which aims to stop half-naked women from appearing on the city's billboards.

German Citizen Receives Suspended Sentence for Sex With Russian-Speaking Teen
Advertisers in Berlin may have to depart from the "sex sells" mantra if they want to promote their products in the German capital, after local politicians moved a step closer to banning "sexist advertising."

A new proposal aims to prohibit the sale of billboard space for ads which are deemed to be degrading to women.

The bill, which wants to ban "sexist, discriminatory and misogynist advertising," was proposed in the Charlottenburg-Wilmersdorf district of Berlin, by politicians from the leftist Die Linke party.

It seems likely to pass, since local council representatives of the Social Democratic Party (SPD) and Greens have already signaled their support for the move.

It follows last October's announcement that the Berlin coalition government plans to ban "sexist and discriminatory advertising" throughout the state.

Following state elections in Berlin in September, the SPD, Greens and Die Linke unveiled their plans for the next five years of coalition government, which included plans to tackle "sexism in public spaces."

"Sexism begins with a degrading image of women and LGBTTIQ individuals, which is put across in many areas of everyday life. The next invitation for tenders for advertising rights in the state of Berlin will make the exclusion of sexist and discriminatory advertising a firm condition," they wrote in their coalition agreement.

Similar legislation has already been passed in the Berlin district of Friedrichshain-Kreuzberg.  In 2014, the local council there prohibited "advertising which degrades people because of their gender, sexual orientation or identity."

Writing in the Berlin-based Tagesspiegel newspaper, columnist Harald Martenstein compared the ban to rules imposed by the Taliban.

"The District Office is to ban advertising campaigns which call sexual equality into question, in which male dominance, for example in the building market or when buying a BMW, is not critically presented, in which bodies are 'inapropriately represented' and — although this is not directly related to sexism – are not critical of all kinds of exploitation."

"The reasoning states that in the future advertising can only be legal if it corresponds to the political 'ideals of an emancipated, conscious and sustainable life.' Advertising committed to political ideas is something that, until now, was mostly seen in North Korea. The phrase 'inappropriate representation of bodies,' on the other hand, could have been adopted from the Taliban manifesto," Martenstein wrote.

Despite the politicians' best efforts, Berlin's official agencies have sometime been accused of promoting sexual stereotypes.

Last year, the Berlin Verkehrsbetriebe (BVG), which manages the city's transport system, received some complaints about a series of adverts which sought to tackle fare-dodging.

​In one advert which promotes the Berlin day ticket, two gay men wearing leather are pictured with the caption, "Take you to the other riverbank: the day ticket." The caption is a reference to a 1970s gay club in West Berlin.

​​Another advert aimed to draw attention to the fact that small dogs are allowed to ride the U-Bahn underground railway for free.

"You don't have to hide your pugs," the advert said, played on the fact that pugs (Moepse) is also a German slang word for breasts.