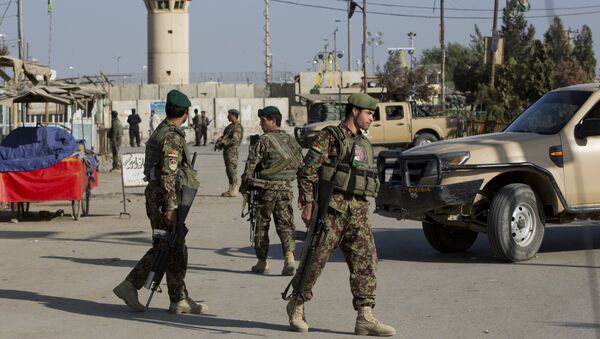 © AP Photo / Massoud Hossaini
Subscribe
International
India
Africa
Just a few hours after a deadly Taliban attack that killed eight, Afghan authorities arrested a teenaged boy who attempted to blow himself up at Bagram Air Field, the largest US military base in Afghanistan.

The boy was detained outside the base's outermost gate with a suicide vest and hand grenades in his possession, according to Bagram authorities. However, Bagram police issued a conflicting report claiming that the boy had no suicide vest.

Bagram police officer Abdulsamad Zalmi said the boy, a resident of nearby Laghman province, was being investigated to see if he was part of a larger conspiracy, or if he had additional explosives stored nearby.

As for the Americans, United States Forces-Afghanistan claimed that a civilian armed with two hand grenades approached the base and was detained. "There were no injuries during the incident and a security sweep of the area yielded no additional explosives," USFOR-A said.

The arrest came just a few hours after another incident at Bagram base, where a group of fighters attacked a van transporting Afghan security personnel to the Air Field. The guards were on their way to work when they were attacked, according to Quddusi. Eight were killed and two wounded in the attack.

Asia
At Least Two Injured in Explosion in Eastern Afghanistan

The Taliban claimed responsibility for the attack. They labeled the guards as American spies. Taliban fighters have recently increased the intensity of operations against coalition forces. On Saturday, at least one Afghan was injured and seven American servicemen were wounded in an attack on Camp Shaheen, an Afghan military base.

The Saturday before that, three US soldiers were killed in Nangarhar province when a Taliban agent that infiltrated Afghan security forces opened fire on them.

Bagram had about 3,000 Afghan workers stationed there before November 2016, when a worker detonated a suicide bomb that killed himself along with four Americans. 17 others were wounded in that attack. After that, the US limited the number of Afghans on base to 1,500.

US Defense Secretary James Mattis said earlier in June that he intended to present a new Afghan strategy to President Trump in coming weeks. Part of that plan is an expected increased deployment of American servicemen, around 3,000-5,000 people.

At present, there are about 8,400 American and 6,500 foreign troops deployed in Afghanistan, mostly in training and advisory roles.