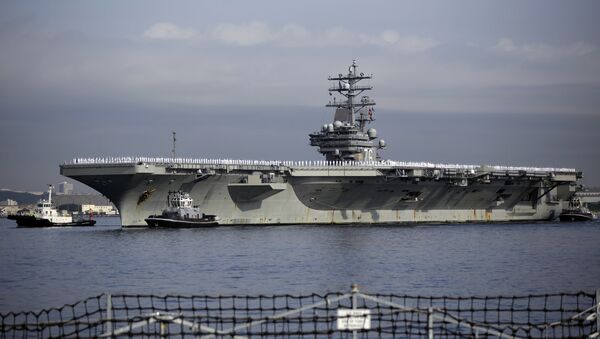 © AP Photo / Eugene Hoshiko
Subscribe
The US aircraft carrier Ronald Reagan and Carrier Strike Group 5 have arrived in Singapore for a routine port visit, the US Navy said in a press release on Monday.

US Aircraft Carriers Ronald Reagan, Carl Vinson Withdraw From Sea of Japan
WASHINGTON (Sputnik) — Carrier Group 5 is currently on patrol in the Indo-Asia-Pacific region to support regional security and stability, the release said.

China and several US allies in the region —Japan, Vietnam and the Philippines — have competing claims to the maritime borders and responsibility areas in the South China and East China seas.

In January 2013, the Philippines formally initiated arbitration proceedings against China's claim on the Spratly Islands, also known as the Nansha Islands. The Permanent Court of Arbitration ruled in 2016 that the islands were not an exclusive economic zone for China, but Beijing refuses to recognize the tribunal's ruling.