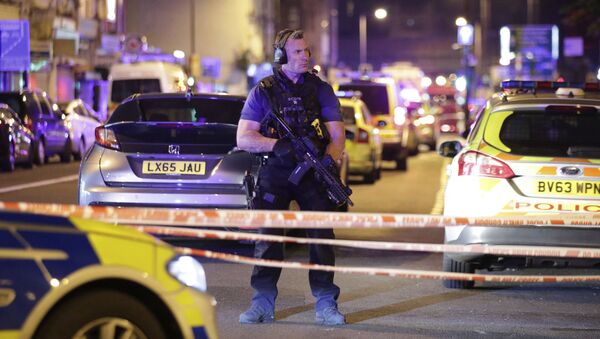 © AP Photo / Yui Mok/PA via AP
Subscribe
UK Prime Minister Theresa May said on Monday that the ramming incident near the Finsbury Park Mosque in North London was a terrorist attack, confirming previous statements by officials.

UN Analyzing London Mosque Attack, Early Signs Indicate Act of Terror
MOSCOW (Sputnik) — Earlier in the day, the Metropolitan Police said they were called following a van collision involving pedestrians near a mosque on Seven Sisters Road, located near the Finsbury Park station. At least one person was killed and 10 more were injured, with eight of them hospitalized. Media reported soon after the incident that a man armed with a knife jumped out of a van and stabbed at least one person.

Metropolitan Police were called soon after 12:20 a.m. (23:20 GMT on Sunday) after the first reports of a van colliding with pedestrians.

Police added that the driver was detained by members the public and then handed over to police officers.

US Vows to Provide Any Necessary Assistance to UK After Latest London Attack
According to the police, the investigation of the ramming incident "is being carried out by the Counter Terrorism Command."

The London Ambulance Service said in a statement that it was called to the scene at 12:15 a.m. and responded to the incident by sending some 60 medics. The ambulance service reported that eight victims of the ramming incident were sent to three London hospitals, while others were treated for minor injuries at the scene.

London's Metropolitan Police said in a statement later on Monday that searches were carried at a residential address in the area of the Welsh capital of Cardiff in relation to the attack. UK Minister of State for Security Ben Wallace noted that the attacker was not known to the UK authorities.

Soon after the incident May said in a statement that the attack was of terrorist nature and listed several steps that would be taken following the incident.

Trump Offers Assistance to UK After London Finsbury Park Terror Attack
"This morning woke to news of another terrorist attack on the streets of our capital city, the second this month and every bit as sickening as those which have come before. It was an attack that once again targeted the ordinary and the innocent going about their daily lives, this time, British Muslims as they left a mosque having broken their fast and prayed together at this sacred time of year. Today, we come together as we have done before to condemn this act and to state once again that hatred and evil of this kind will never succeed," May said, adding that the attacker acted alone.

The prime minister said that extra resources had been deployed in the wake of the Finsbury Park attack, adding that London would establish a special commission against extremism, including Islamophobia.

How WikiLeaks Has Survived While Julian Assange Has Been Holed Up in London
"As I said here two weeks ago, there has been far too much tolerance of extremism in our country for many years, and that means extremism of any kind, including Islamophobia … It is why we will be reviewing our counterterrorism strategy and ensuring that police and security services have the powers they need. And it is why we will establish a new commission to counter extremism as a statutory body to hate fight hatred and extremism in the same way we fought racism," May said.

The head of the UK government was not the only country's official who condemned the attack.

UK Home Secretary Amber Rudd said that the incident could be classified as a suspected terrorist attack and called for citizens to stand together against those who spread hate and fear.

"We must all continue to stand together, resolute, against all those who try to divide us and spread hate and fear," Rudd said, adding that she was in contact with police on the issue.

UK Foreign Secretary Boris Johnson offered his condolences to the victims of the incident, adding that the country would not be divided by hate.

"My condolences to the victims of last night's despicable attack in #FinsburyPark. We will never allow hate to divide us," Johnson said on his Twitter account.

A number of foreign ministries and officials condemned the attack and wished the victims to get well.

"France decisively condemns the attack that took place… near a mosque in the Finsbury Park area in London… In the face of this new challenge, France assures London residents and UK authorities that it is stands in solidarity with them," the French Foreign Ministry said in the communique.

German government also extended its condolences to the friends and relatives of the victims.

London Police Probe Link Between Van Ramming, Death at Finsbury Park
"[We] express condolences to all the victims and their loved ones, to the people in this mosque and to all our friends in London and the United Kingdom," German government spokesman Steffen Seibert said, urging against jumping to conclusions before the attacker's motives become clear.

With six ramming attacks carried out globally over the last 12 months, three of them in the United Kingdom, UK experts are trying to find a way to prevent such incidents and preserve security in the country.

"It is impossible to prevent this type of attack. There are too many unprotected targets. We need to focus on preventing radicalization by committing more resources to work with all communities to stop people becoming violent extremists," counter-terrorism expert Bob Milton told Sputnik.

Mayor of London Condemns 'Horrific Terrorist Attack' in Finsbury Park
Milton, who had served for London Metropolitan Police and is currently the distinguished professor of criminal justice at the US Bay Path University, noted that there were three areas the security services needed to focus on. One of them is to encourage the reporting of persons who may be on the path to violent extremism by gaining trust, empowering families and women and offering training and guidance.

The second area the authorities should focus on is the use of the multi-agencies risk assessment model to determine what level of intervention is required in case of a person's radicalization, Milton noted. Finally, the expert suggested elaborating a "menu of intervention measures" aimed at turning a person away from violent extremism or at least, disrupting his or her plans.

"The reduction in 20,000 police officers has not caused an increase in the attack, but it has meant that we are unable to respond effectively and the police service is stretched to breaking point. The government are right to reexamine the CT Strategy and should focus on countering radicalization," Milton stressed.

John David Taylor, a crossbench member of the upper house of the UK parliament, in turn, suggested the more severe measure to ensure security in the United Kingdom.

"It is regrettable that across the world there is Islamic extremism in every nation where there is a Muslim community … It is important that the UK restricts Muslim immigration into the country as British standards are foreign to them," Taylor told Sputnik.

Taylor also noted that the reduction of the country's police force by some 20,000 officers by the previous government, in which May served as home secretary, was not conductive to counterterrorism.

000000
Popular comments
so 'extremism' however that is defined and regardless of where there is an organic basis in mental health problems, will now be defined as terrorism? If that is the case, the theorists and politicians have certainly lost the plot as anything could now be so defined.
michael
20 June 2017, 02:19 GMT
000000
Newsfeed
0
New firstOld first
loader
LIVE
Заголовок открываемого материала
Access to the chat has been blocked for violating the rules . You will be able to participate again through:∞. If you do not agree with the blocking, please use the feedback form
The discussion is closed. You can participate in the discussion within 24 hours after the publication of the article.
To participate in the discussion
log in or register
loader
Chats
Заголовок открываемого материала
Worldwide
InternationalEnglishEnglishMundoEspañolSpanish
Europe
DeutschlandDeutschGermanFranceFrançaisFrenchΕλλάδαΕλληνικάGreekItaliaItalianoItalianČeská republikaČeštinaCzechPolskaPolskiPolishСрбиjаСрпскиSerbianLatvijaLatviešuLatvianLietuvaLietuviųLithuanianMoldovaMoldoveneascăMoldavianБеларусьБеларускiBelarusian
Transcaucasia
ԱրմենիաՀայերենArmenianАҧсныАҧсышәалаAbkhazХуссар ИрыстонИронауОssetianსაქართველოქართულიGeorgianAzərbaycanАzərbaycancaAzerbaijani
Middle East
Sputnik عربيArabicArabicTürkiyeTürkçeTurkishSputnik ایرانPersianPersianSputnik افغانستانDariDari
Central Asia
ҚазақстанҚазақ тіліKazakhКыргызстанКыргызчаKyrgyzOʻzbekistonЎзбекчаUzbekТоҷикистонТоҷикӣTajik
East & Southeast Asia
Việt NamTiếng ViệtVietnamese日本日本語Japanese俄罗斯卫星通讯社中文（简体）Chinese (simplified)俄罗斯卫星通讯社中文（繁体）Chinese (traditional)
South America
BrasilPortuguêsPortuguese
NewsfeedBreaking
08:55 GMTPutin Offers Deep Condolences to Relatives of Perm University Shooting Victims, Kremlin Says
08:39 GMTAustralia Trade Minister Looks Forward to Meeting With French Colleagues Amid Sub Deal Row
08:38 GMTVolcano Eruption on Spanish Island of La Palma Forcing Evacuations
08:06 GMTMen Sleep Worse During Waxing Moon, Women Unaffected – Study
07:58 GMTEmmy Awards 2021: Big Winners, 'Hollywood's Most Hated Man' and #SoWhite Controversy
07:30 GMTIndia: Uproar Over Arrest of BJP's Kirit Somaiya in Maharashtra For Accusing Minister of Corruption
07:10 GMTFinnish PM Embroiled in Product Placement Controversy Over Instagram Story
07:05 GMTEight Killed as Gunman Goes on a Shooting Spree at Russia's Perm University
06:27 GMTCanada Set to Deliver Verdict in Testy Vote as PM’s Cakewalk Becomes Nail-Biter
06:17 GMTTaliban Order Women Working in Kabul to Stay at Home, Interim Mayor Says
06:12 GMTSweden Raises Taxes to Finance Largest Military Investment in Modern Times
06:01 GMTBoJo Vows UK’s ‘Ineradicable’ Love of France in Bid to Mend Fences Amid Diplomatic Row Over AUKUS
06:00 GMTBritain Considers Offering Loans to Energy Firms Amid Dramatic Hike in Gas Prices - Report
05:29 GMTRussia’s Ruling Party Ahead in Parliamentary Vote With Over 48%, Election Commission Says
04:34 GMTLive Updates: UK PM Johnson to Push Joe Biden to Lift COVID-19 Travel Ban With US
04:30 GMTNot in the Mood: Golden Retriever Does Not Want to Cuddle
04:28 GMTChinese Observers Give Positive Assessment of Russian State Duma Election
03:45 GMTMusk Adds Another Joke to Joe Biden’s ‘Sleepy’ Issue, When Asked About ‘Inspiration4’ Flight
03:16 GMTKhamenei Appoints New Head of Iranian Air Force
03:16 GMTWait, Again? New Photo of Trudeau Wearing Blackface Emerges on Social Media