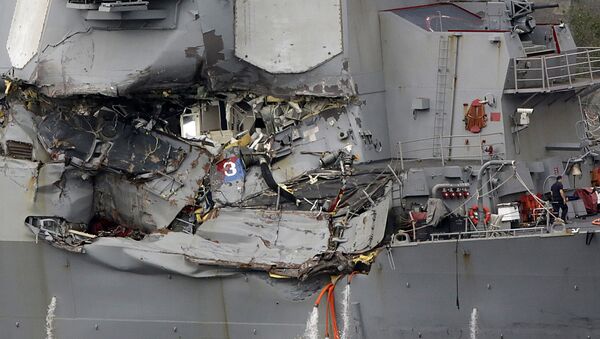 © AP Photo / Eugene Hoshiko
Subscribe
Almost one hour after a collision that would claim the lives of seven US Navy sailors, the containership that had crashed into the USS Fitzgerald hadn’t reported the incident—and officials can’t figure out what caused the delay.

The Japan Transport Safety Board and Japanese Coast Guard launched an investigator into the incident on Monday, according to the Japan Times.

Sailors aboard the 29,000-ton ACX Crystal told the Japan Times that the incident occurred around 1:30 a.m., not 2:25 a.m. as originally reported by the Japanese Coast Guard. The Crystal’s navigation route shows abrupt turn occurring at 1:30 a.m. when the accident first occurred indicating it had gotten off path, according to MarineTraffic, a ship tracker. The Crystal reversed and returned to the scene of the crash at 2:20 a.m. NYK Line, the Japan-based transportation company operating the merchant ship, agreed to the revised timeframe.

A spokeswoman for the ship’s operator refused to say what the crew was doing during the 50 minutes, but the investigation will include poring through communications records from that timeframe, officials said Monday.

Mia Sykes, a mother of one of the sailors, said that her son informed her that sleeping quarters immediately began taking on water following impact, the Chicago Tribune reported. Four men in her son’s berth died, including the ones on bunks immediately above and below him, did not survive.  Many of the ship’s 300 sailors went up to the guns thinking the ship was under attack, she said. “You have to realize most of them are 18-, 19-, and 20-year-olds living with guilt,” Sykes explained, adding, “But I told him, ‘there’s a reason you’re still here and make that count.’”

The Arleigh Burke-class guided missile destroyer displaces just 6,800 tons before the much larger cargo ship struck its forward starboard. Sixteen hours passed before the vessel to return to port, the 7th Fleet said.

“Sailors and community members from Commander, Fleet Activities Yokosuka, are rallying around the crew and families of USS Fitzgerald,” the Commander of US Naval Forces Japan said in a June 19 statement. “Collectively, we mourn the loss of our seven shipmates.”

000000
Popular comments
Given that the typical US destroyer carries a radio or two, when did the USS Fitzgerald send out its distress signal? Were they somehow awaiting the ACX Crystal to get around to calling for assistance? Did they make a timely report but Japanese officials were waiting for the Crystal? This report is still lacking in the facts.
jkel
19 June 2017, 23:08 GMT5
000000
jkel, Maybe the USS Fitzgerald was "running silent", why it did not send out a distress signal.....and why it got clobbered on the starboard side - I would be rofl if it were not for the loss of lives. More seriously, the crew of the container ship probably expected that the destroyer with all its modern comm equipment had sent a message to HQ. With a small crew, they probably were overwhelmed dealing with the situation. Navy ship crews regularly (or should) drill on damage control. Container ship crews not so often.
Erik Trete
19 June 2017, 23:15 GMT2
000000
Newsfeed
0
New firstOld first
loader
LIVE
Заголовок открываемого материала
Access to the chat has been blocked for violating the rules . You will be able to participate again through:∞. If you do not agree with the blocking, please use the feedback form
The discussion is closed. You can participate in the discussion within 24 hours after the publication of the article.
To participate in the discussion
log in or register
loader
Chats
Заголовок открываемого материала
Worldwide
InternationalEnglishEnglishMundoEspañolSpanish
Europe
DeutschlandDeutschGermanFranceFrançaisFrenchΕλλάδαΕλληνικάGreekItaliaItalianoItalianČeská republikaČeštinaCzechPolskaPolskiPolishСрбиjаСрпскиSerbianLatvijaLatviešuLatvianLietuvaLietuviųLithuanianMoldovaMoldoveneascăMoldavianБеларусьБеларускiBelarusian
Transcaucasia
ԱրմենիաՀայերենArmenianАҧсныАҧсышәалаAbkhazХуссар ИрыстонИронауОssetianსაქართველოქართულიGeorgianAzərbaycanАzərbaycancaAzerbaijani
Middle East
Sputnik عربيArabicArabicTürkiyeTürkçeTurkishSputnik ایرانPersianPersianSputnik افغانستانDariDari
Central Asia
ҚазақстанҚазақ тіліKazakhКыргызстанКыргызчаKyrgyzOʻzbekistonЎзбекчаUzbekТоҷикистонТоҷикӣTajik
East & Southeast Asia
Việt NamTiếng ViệtVietnamese日本日本語Japanese俄罗斯卫星通讯社中文（简体）Chinese (simplified)俄罗斯卫星通讯社中文（繁体）Chinese (traditional)
South America
BrasilPortuguêsPortuguese
NewsfeedBreaking
05:10 GMTSociety Cannot Be 'Held Hostage' by Unvaccinated, Finnish Health Boss Claims
04:30 GMTGimme That: Adorable Golden Retriever Twins are Ready for a Treat
04:16 GMTUS House Armed Services Committee Warns Troubled F-35 Program May Become Unsustainable at Its Peak
04:01 GMTUS Civil Rights Leader Applauds Police Chokehold Ban, Urges Congress to Move on Floyd Act
03:55 GMT'Cut Him Off Now!': Newsmax Host Loses Cool After US Vet Critiques Trump Over Afghan Withdrawal
03:20 GMTUK High Court Rules Will of Prince Philip to Remain Sealed for 90 Years
02:31 GMTUS Coast Guard Joins Australia Navy for 3-Day Exercise in South China Sea
01:56 GMTAlex Murdaugh and The Fall of a Southern Dynasty
01:33 GMT'At the End of the Occupation' Country Faces Many Challenges - Head of Afghan National Peace Council
01:11 GMT'Human-Sized Penguin' Uncovered by New Zealand Schoolchildren Reveals Ancient Species
00:52 GMTTrump Expresses Sympathy for US Capitol Riot Suspects Ahead of September 18 Rally
YesterdayUS Approves $500Mln Military Sale to Saudi Arabia to Support Copter Fleet - Pentagon
YesterdayMinneapolis Police Department Buys ‘Not-Reaching Pouches’ to Reduce Deadly Traffic Stops
YesterdayTexas Governor Says Biden Administration Had Plans to Close Section of US-Mexico Border
YesterdayBotched FBI Probe Into Nassar Abuses Highlights ‘Endemic Failures’ Within Bureau, Former Agent Says
YesterdayTwitter Goes Bonkers After Star Batsman Virat Kohli Quits as Skipper of India's T20I Cricket Team
YesterdayHuman Hair as Pet Food? Indian Scientists Develop Unique Way to Use Keratin Waste
YesterdayBiden Retrieved on New Attack Ad Against Buttigieg Over Fears of Reprisal, Book Claims
YesterdayHow New Book About Trump Misfired, Inflicting Further Damage to Biden's DoD After Afghan Debacle
YesterdayUS Grand Jury Indicts Clinton-Linked Attorney for Making False Statements to the FBI