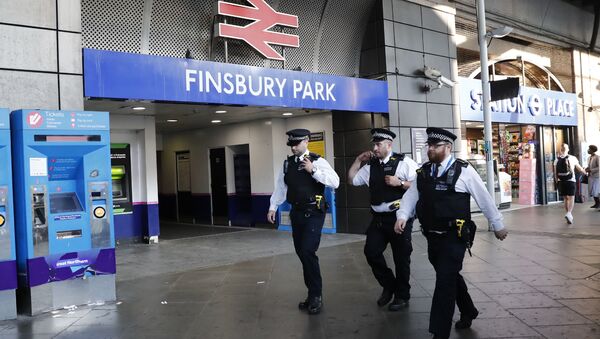 © AFP 2023 / Tolga Akmen
Subscribe
International
India
Africa
An incident that took place in London's Finsbury Park on June 19 has come under fire from social media users who have questioned why the UK mainstream media took so long to call the incident an act of terror.

The attack, which took place shortly after midnight on Monday, June 19, where a white man drive a van into worshippers near a north London mosque, has caused a social media outcry.

Users expressed confusion and anger as initially authorities had chosen not to label the incident as a terror attack.

Terrorism is terrorism, the killing of innocent people of any race/religion is unacceptable. What a mess the world is in. #FinsburyPark

Many of those worshipping in the Mosque had to fight off the attacker. One man was killed and 10 were injured.

Latest statement: Our thoughts are with all of those affected by the incident in #FinsburyPark earlier today https://t.co/oL75V7ZUWD pic.twitter.com/mm6563MLot

People have taken to social media to complain that UK mainstream media and police took their time when it came to calling the attack an act of terror.

This has caused some to label the authorities as hypocrites, especially in relation to incidents concerning ethnic minorities.

Terrorism has no race or religion… Apart from in the media that is #FinsburyPark pic.twitter.com/BBBTjiXwna

Some people have said if the person involved is black, they are called thugs, and if they're Muslim, they are automatically labeled as a terrorist. However, when it comes to white attackers they tend to be called lone wolves with mental health problems.

Police were called just after 00:20 to reports of a vehicle in collision with pedestrians.

At 04:00 the police were calling the attack an "incident," however it was clear that a man had driven a van into pedestrians as the police report announced that they had arrested the individual.

The moment one of the perpetrators of the #FinsburyPark attack was caught and restrained by worshippers. pic.twitter.com/xfCVsl0QGj

Finally, at 08:27 the police called the attack as one of terror.

Again: let's talk about how the #FinsburyPark terrorist was radicalised. pic.twitter.com/t3O6q5zfXq

Let's talk about how JK Rowling is a complete hypocrite who is selectively outraged about terrorism when she can use it to bash her enemies. https://t.co/9EcPWcRN5m

Deputy Assistant Commissioner Neil Basu, the Senior National Coordinator for Counterterrorism, said that once again London was waking up to the news of another "dreadful incident."

"The attack unfolded whilst a man was receiving first aid from the public at the scene, sadly, he has died. Any causative link between his death and the attack will form part of our investigation. It is too early to state if his death was as a result of the attack," Mr. Basu said in a police statement.

The Mayor of London, Sadiq Khan called the attack a terrorist incident at 05:29.

UK Prime Minister Theresa May appeared in Downing Street following an emergency government COBRA meeting which she had called for in the early hours of Monday.

Mrs. May confirmed that the police believe the man responsible for the terror attack acted alone, and made clear that "hatred and evil" will never succeed with an attack "every bit as insidious and destructive to our values and our way of life."

"The attack again targeted the ordinary and the innocent going about their daily lives — this time, British Muslims as they left a mosque, having broken their fast and prayed together at this sacred time of year. Today we come together, as we have done before, to condemn this act and to state once again that hatred and evil of this kind will never succeed," she said.

UK Foreign Secretary Boris Johnson offered his condolences to the victims of the Finsbury Park attacks.

My condolences to the victims of last night's despicable attack in #FinsburyPark. We will never allow hate to divide us

However social media has come out against the UK mainstream media who have labeled the attack as an "incident" as opposed to an act of terror.

Some Twitter users offered apologies to the Muslim community on behalf of the media, who they believe had caused the attack.

The Sun, called the attack in a tweet a "revenge attack," however members of the Muslim community reacted by saying that this was not an act of revenge as the people who were at Finsbury Park had nothing to do with previous terror incidents, they were "innocent people," one Twitter user proclaimed.

Disgusting #TheSun calling #FinsburyPark a "REVENGE terror attack"="shouldn't do it but if they hadn't done [x]"=what ALL terrorists think! pic.twitter.com/cmMl0Finzh

This WAS NOT a "revenge attack". Those who were at #FinsburyPark had nothing to do with previous terror incidents. They were innocent people

The Daily Mail said that the attack was committed by a "clean-shaven white man" and failed to mention that he had killed one person. Social media users accused UK mainstream media of dumbing down the attacker, with one Twitter user saying that the man who drove his car into pedestrians was NOT a clean shaven man.

The Muslim Council of Britain, a national representative for Muslim people, released a statement on the incident and condemned the attack.

Harun Khan, Secretary General of the Muslim Council of Britain said that during the night, ordinary British citizens were set upon while they were going about their lives, completing their night worship.

"My prayers are with the victims and their families. It appears from eye witness accounts that the perpetrator was motivated by Islamophobia," Mr. Khan said in a statement.

MEND, an anti-islamophobia NGO charity, has also condemned the attack and said that it may have been encouraged by the leader of the English Defense League, Tommy Robinson, who said that militias will be set up and angry people will "clean out this Islamic problem."

Two weeks before #FinsburyPark attack Tommy Robinson says militias will be set up & angry people will "clean out this Islamic problem" pic.twitter.com/qctQQ6di6d

Let's find out which Church the Finsbury truck terrorist attended. If the preacher there incited violence on Muslims, he should be arrested

Some social media users have come out in defense of mainstream media, saying that it is wrong to blame them and that people shouldn't make it out to be about Islamophobia.

To be fair, BBC and responsible news outlets always do this to avoid inflaming hatred — it's the same after Islamist ones till facts known

Other users said that it was common for news outlets to wait before they confirmed if an incident was one of terror or not.

They do this with every incident. They wait for official confirmation.