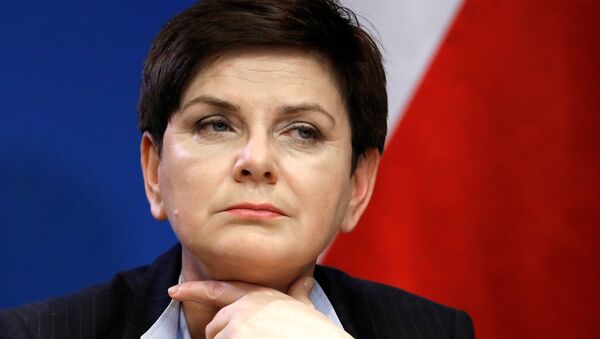 © REUTERS / Yves Herman
Subscribe
According to the Polish prime minister, a wave of terrorist attacks in Europe is a result of irresponsible migration policy.

Boris Johnson After Finsbury Incident: 'We Will Never Allow Hate to Divide Us'
WARSAW (Sputnik) — A wave of terrorist attacks in Europe is a result of irresponsible migration policy, Polish Prime Minister Beata Szydlo said on Monday.

"This is a result of irresponsible policy conducted for years, which has led to the situation when people, who have come to Europe or have lived in Europe for several generations, are left to themselves and have no prospect for their future," Szydlo said in an interview given on Polish TV.

At the same time, the prime minister once again spoke against the relocation of refugees. "Politicians, in order to feel good about themselves, decided to simply relocate these people from one place to another and thus solve the problem. The problem will not be solved. This is why, the Polish government speaks directly and clearly that we need to help these people, but we must do it at their homes, where they live," Szydlo stressed.

The Polish prime minister also spoke against humanitarian corridors for medical treatment of refugees. "If we talk about humanitarian corridors, I appeal, first of all, for an answer on whether it would not be easier to open a hospital right on-site? We would be able to help and treat more people on-site than when we bring them to Poland," Szydlo added.

London Police Probe Link Between Van Ramming, Death at Finsbury Park
In the fall of 2015, the EU countries decided to accommodate on their member states' territory 160,000 African refugees located at that time in Greece and Italy. The quotas had been distributed in proportion to population of the resting EU states, as well as other factors. Poland accepted 7,000 people, the Czech Republic — 1,600, Hungary — 1,300, and Slovakia — 900. Over the past two years, Poland and Hungary have not accepted a single migrant, the Czech Republic has accepted 12 people, Slovakia — 16.

In June, the European Commission informed these member states that it was planning to launch infringement procedures against Prague, Warsaw and Budapest over their refusal to accept refugees, which could potentially lead to sanctions. The letters of formal notice have been forwarded to the three states on June 14, with a response due within 30 days.