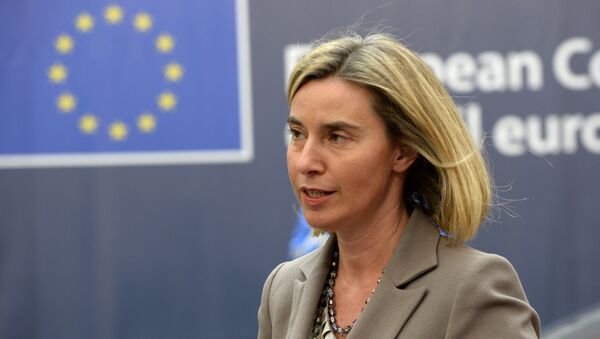 © AFP 2023 / THIERRY CHARLIER
Subscribe
International
India
Africa
The EU high representative for Foreign Affairs and Security Policy said that the EU called for a dialogue to solve the Qatari crisis.

"No unilateral steps. We invite all to de-escalate tensions and engage in direct dialogue," Mogherini told reporters before the meeting of the foreign ministers of the EU member states in Luxembourg, adding that "any difficulties and tensions can and must be solved at the table by dialogue and politically."

Mogherini also stressed that the European Union was directly interested in the Gulf countries' cooperation with each other.

Bahrain Kicks Out Qatari Troops Partaking in Anti-Daesh Combat
"I expect today from the ministers another sign and determination of the European Union to back our friends and brothers from Kuwait in this difficult work they are doing," Mogherini noted.

On June 5, a diplomatic crisis erupted in the Middle East when Saudi Arabia, the United Arab Emirates (UAE), Bahrain and Egypt broke off their diplomatic ties and other communication with Qatar, accusing Doha of supporting terrorism and interfering in their internal affairs.

The rift continued when the Maldives, Mauritius, and Mauritania also announced the severance of diplomatic relations. Later, Jordan and Djibouti reduced the level of their diplomatic missions in Qatar, and Senegal, Niger and Chad withdrew their ambassadors from Doha.